Quilts and the Underground Railroad - - Brilliant !! 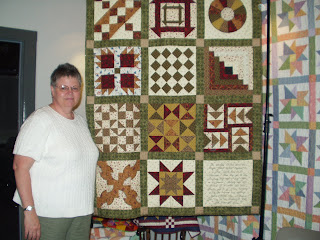 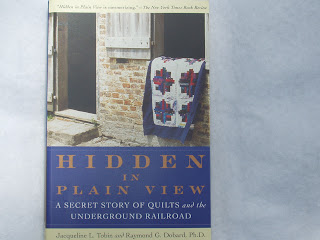 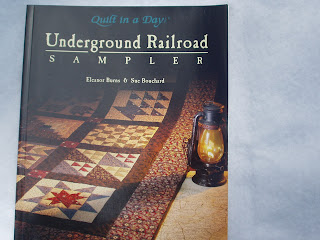 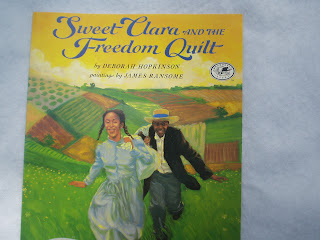 Last Wednesday my mother and I went to a really interesting lecture about "Quilts of the Underground Railroad". The lecture was given by a local lady , Susan Paul , who is a quilt maker, quilt teacher, quilt designer AND also a high school home ec teacher. (that's Sue in the first picture posing with her Underground Railroad sampler quilt she made and uses to explain the theory. The patterns for her sampler came from Eleanor Burns' book "Underground Railroad Sampler"--- picture #3) Sue uses the book "Hidden in Plan View" (by Jacqueline Tobin and Raymond Dobard --- picture #2) as the basis of her lecture. This whole theory/story came to the attention of Jacqueline Tobin in 1994 when she was in Charleston, SC and met an African American quilter Ozella McDaniel Williams who was a vendor in the Old Market Building in Charleston (I was there last summer -- it's really neat -- what I could see of it in the half hour blur I was alloted by my husband and 2 teenage sons who were bored out of their minds -- UGH! --I've got to go there sometime BY MYSELF !) Anyhow, Ozella , over the course of a few years, told Jacqueline Tobin a story that had been passed along in her family from generation to generation. That story has to do with quilts and "how enslaved men and women encoded messages within quilt patterns that helped fugitives navigate their escape along the Underground Railroad." In her lecture, Sue explained that a seemingly innocent and very everyday sort of object like a quilt hanging on a fence or airing out in an open window was really a message to a slave who was getting ready to make their escape. Each pattern had a specific meaning or code and gave that slave instructions for their next move. According to Eleanor Burns' book, the Monkey Wrench quilt was the first quilt displayed as a signal for any slaves who planned to escape.(on Sue's quilt, that's the block in the middle of the top row.) "This quilt symbolized the time to collect tools they would need on their journey north to freedom." The second quilt the slaves would see would be the Wagon Wheel quilt (on Sue's quilt, that's the block on the far right in the top row.) This quilt was "a message to pack provisions for their journey as if they were packing a wagon....... pack supplies that would be essential for survival." The next block Sue has on her sampler is the Bear Paw block (2nd row, 1st block). To a slave "reading" this quilt, it meant they were to follow the actual trail of a bear's footprints. "Animal footprints would indicate the best path through the mountains....and would lead to food and water." Sue went on the explain the meanings/codes behind the rest of the quilt blocks -- VERY INTERESTING !!

The third book , Sweet Clara and the Freedom Quilt (by Deborah Hopkinson) is a fictional story of a young slave girl who was separated from her mother and sent to another plantation to work. She is taken care of by another slave, Aunt Rachel, who is the seamstress for the "Missus" in the "Big House". Aunt Rachel teaches Clara to sew, and Clara eventually figures out how to piece a quilt that is an actual map showing the way through the woods, streams, etc to the Ohio River , then to Canada and freedom.

Now - - here's my summary of this entire theory . In a nutshell, this is just another example of how women and their "ho hum" domestic skills played a HUGE role in this country's history and (let's shout this loud and clear) SAVED THE DAY !!! Right?!? Think about it -- who were the quiltmakers? WOMEN !!! LET'S HEAR IT FOR THE GIRLS !!!!

I also have to tell you about a fun little bonus from Sue's lecture last Wednesday evening. An elderly lady who also was at the lecture went up to Sue afterwards to tell Sue how much she enjoyed the lecture and also to see if Sue remembered her. It turns out this lady, Miss Richards, was Sue's 7th grade Home Ec teacher at Tamaqua Junior High -- AND, she was also MY 7th grade Home Ec teacher !!!!---which , of course, I had to jump right in the middle of their conversation and practically shout --"MISS RICHARD'S -- you were my home ec teacher ,too !!! Remember me ?!? I still have the SPAM recipe !! Poor Miss Richard's!! I think it was all coming back to her now -- Anyhow, Sue , who was a few years ahead of me in school, said they also made a Spam recipe (their's was a BBQ Spam, ours was an Easter Spam -- yum, yum ! I guess Miss Richard's was a big fan of Spam.) The 7th grade sewing project was the same for Sue's class and for mine -- that being an apron with GIGANTIC rick rack !! At the time I hated the rick rack -- but now I have to say, I'm a huge fan of rick rack -- and I have Miss Richard's to thank for that!!!

Anyhow, if you're interested in having Sue teach a class or give a lecture, you can reach her at lvtosew@verizon.net. (she lives not too far from me in Pa.)

Toodles,
Mary Anne (aka Mare)
Posted by Mary Anne at 9:56 AM

Yea US!!!! I am jumping up and down in celebration of women -- we make it all go. We know that.

Mary nne, I LOVE these stories of message quilts --0 I'd always heard that quilts were used to direct the way, though I never knew how it worked. Thank you for this.... makes my little forray in quilts "oooooh, pretty colors" seem entirely insignificant. LOL

Hooray for women!!! Loved your entire post - I have read about the huge role quilts played in the history of the underground railroad. Gives me chills just to think about it! I think that's one reason I love quilting so much - it has such a rich and important history.
Thank you for sharing, Mary Anne!

Mary Anne, Your blog has rapidly become a go to place for me. I so enjoy the music, and what you have to say about women, quilting and quilts. I may just pick up my needle again. Haven't made a quilt in a long time, but you are enticing me. thank you. Susan of Black Eyed Susans Kitchen