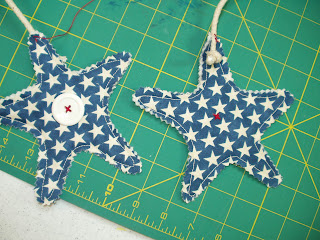 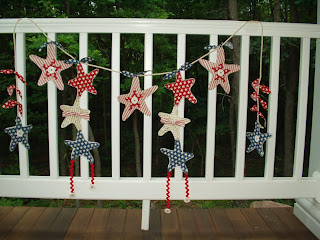 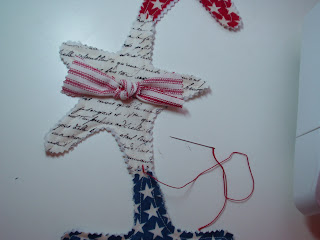 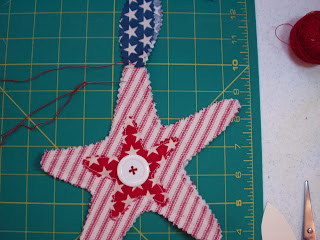 Ready for the Garland Grand Finale ? OK -- here it is ! Tie a knot at each end of the rope. Now take the 2 remaining blue stars and tack one to each knot at the ends of the rope (picture #1).

Next you need to tack together a medium red star, an off white star and a blue star (one with the 2 red rick rack tails dangling from the legs of the blue star) to make 2 cascading star segments (see picture #3). I used the red pearl cotton to take just a few stitches at the "foot" of one star to attach it to the "head" of the next star.

Now it's time to attach the ties to the 3 big red stripe stars, and the 2 sets of cascading stars. Take a blue tie and fold it in half with wrong sides together. Place the fold at the tip of a star and just tack in place with a few stitches (I used the same red pearl cotton that I used to sew the buttons on with). (See picture #4). Now you can tie the 3 big stars and the 2 sets of cascading stars onto the rope and adjust the spacing however you want.

FINALLY -- take the 6 red ties and tie 3 on each end of the rope, above each blue star on either end of the rope (see picture #2) -- adjust spacing of the ties however you want.

Mare! Your pictures and instructions are so very nice!
Thank you once again for sharing! I think we should sew together, don't you? LOL! We could make some Christmas stars!
xo, Nan

Mary ann, Love the garland. OMG I have got to give that a try. It's just the cutest thing. Thanks for sharing with us.