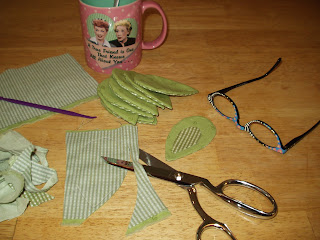 WIP = works in progress . . . . and to answer the question of "how many can there be?" . . . . . . WAY TOO MANY !!!!! Now I don't know if that's a sign of creativity , delusions of grandeur, or just plain short attention span. Anyhow, the first picture is of yet ANOTHER bright idea of mine -- it's part of a quilt that started out as a Grandmother's Flower Garden quilt -- but could I leave well enough alone? NO! ! -- instead of being finished with the darn thing, I just had to add to it and now, of course , it's mushroomed into a major project -- like the other 6 or 7 "quick" quilting projects I'm in the middle of. ( I swear sometimes I'm my own worst enemy!)

Also on the WIP list is the ongoing front yard/planting of all those zillions of shrubs and flowers I bought last week, and that the grounds keeper (aka Dave, my husband) has since added to. Now, I started out happily planting some coneflowers where I wanted them. Since then, the grounds keeper has decided he wanted boxwood shrubs where I planted the coneflowers, so he has since moved my coneflowers . He did let me decide where alot of the other plants and shrubs should be , but he has taken over the actual digging and planting (since apparantly I wasn't doing it correctly --- I get to water --- oh well, works for me! I was also fired from paying the bills back when kid #1 was 6 months old and I hadn't slept in 6 months -- ). Anyhow, the second and third pictures are of all the planting that has been going on around here over the past week -- still have more to do PLUS the entire back yard !!! The last picture shows our front porch (which I love!) badly in need of SWEEPING !!!

Well, I better get back to some of those projects (and a ton of laundry) so I'm not late to pick up kid #1 who is taking his SAT's this morning (and not with a smile on his grumpy little face!).
Oh, and I've been tagged by Doe to list my "to do" list -- well, the above is just the tip of the iceberg! I promise I'll bore you all with the long version soon! I also was tagged by Revka awhile ago to list my kids' names and their meanings, etc -- so I haven't forgotten about that either --- just knee deep in WIP's !!!! 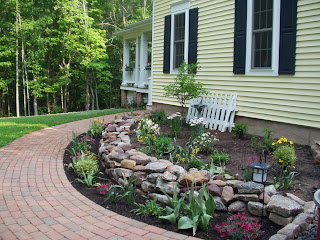 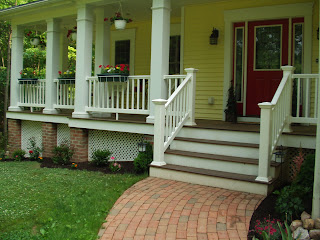 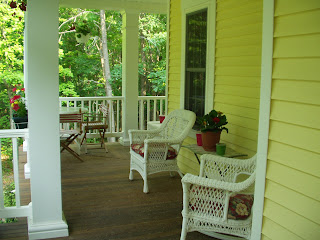 That porch is part of a very nice dream I had. What a prize.

I have a ton of WIPs, too. It's sort of overwhelming.

I love your porch! My house was yellow when I was a little girl. We had a porch, but it was small. I always dreamed of having a porch that wraps around my house. I'm still dreaming!