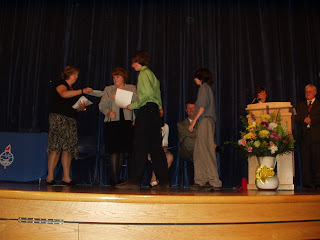 He's Movin' on up (just like the Jeffersons --) except he's not movin' on up to the east side, he's movin' on up to high school! Last night was kid #2's (Evan -- aka my baby) 8th grade Moving Up ceremony. I had to bribe him to go (all week he said he wasn't going because it was stupid and boring -- spoken like the teenager he is -- however bribing him with food -- especially Kentucky Fried Chicken -- always works.) So , in the first picture you see him receiving a special award that only a few other kids in his class earned -- The Presidential Award for Educational Excellence --- YEA EVAN !!

As you can see from the last picture where I made him pose with Jim Thorpe (the olympic athlete for whom the school and town are named for) -- neatness and decorum are completely out the window -- (note untucked shirt). 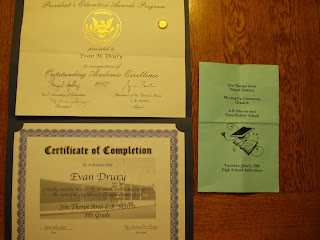 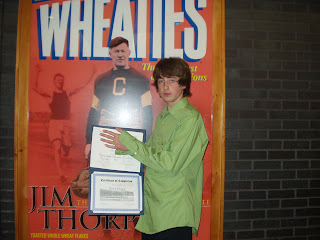 My daughter just finished 8th grade, too, but they didn't have a graduation ceremony. Oh well.

I've already had two children who graduated from High School. Now I have to do the High School thing all over again! I'll wish us both luck with that!