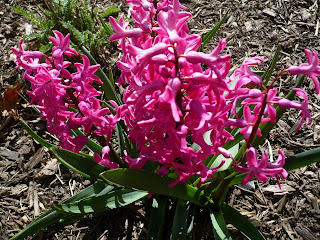 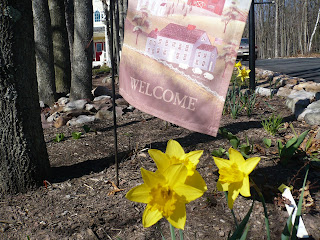 ....and here are more signs of spring in my backyard... 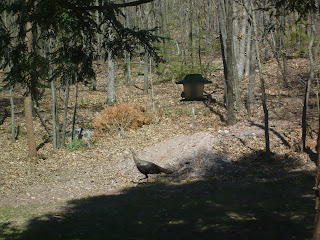 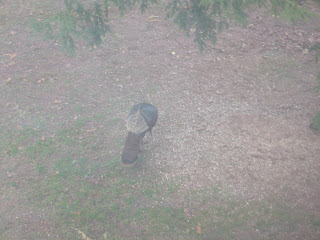 ...lots of birdies at the birdfeeder and a couple of newcomers ...... meet Lou and Thelma Turkey (wild turkeys, that is) ... that's Thelma in the middle of the first picture walking at the edge of the yard, and that's Lou in the second picture with his back to the camera (he was busy eating and made it clear he didn't want to be disturbed .... which was fine with me because at one point he fluffed up all of his feathers and spread his wings and I decided he was probably bigger than me ... anyhow, I took the pictures from inside the house through our dirty windows .... and actually the picture of Lou was from one of the upstairs bedroom windows through the dirty screen .... which further explains the crummy pictures!!) 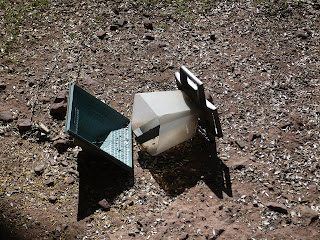 ......empty birdfeeder on the ground ........ which usually means this guy is up from his long winter's nap and was out looking for a midnight snack!! 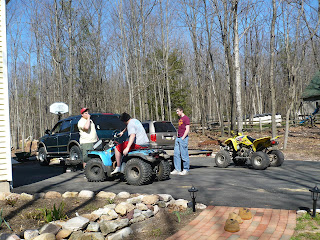 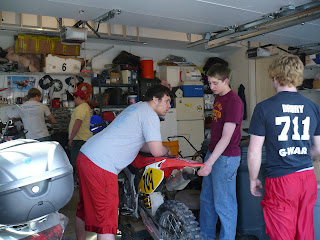 .........the "meeting of the minds" in the driveway and garage ......they're riding and repairing their dirtbikes and "quads" ..... too bad they don't put this much effort into the graduation project that is due in TWO WEEKS !!!!(In the state of Pa, in order to graduate, the kids have to complete a graduation project which involves some kind of communty service, or shadowing a professional in a career they're interested in, and then writing a paper about it ..... soooo, they can be accepted to Harvard and have a 4.0 , but if the graduation project isn't completed and passed, they aren't going ANYWHERE !!!) ...... now, this bunch (all except Evan who is only a freshman) have known about this for the past 3 years .... and now we're DOWN TO THE WIRE .....do they look worried that they've hardly started this project ?!? NO!!! do they have acid indigestion??? NO!!! Do I?!? YES !!! Do they have a STRESS headache?!? NO!! Do I ?!? YES !!!! UGH!!!!

.....OK ..... I think I'll take some tylenol and down a few more Rolaids and then go for a stress-relieving walk ..... well, it'll be stress-relieving if I don't run into the bear that had my birdseed for a snack last night!

It sounds like everything is in running order out at chez MBIAJ.

Glad your computer is fixed and spring has sprung. Beautiful flowers!

Ahhh Mare, thank goodness your back! My days just aren't the same with out a little "swingin on a star". I can't believe you have a bear. You know, I had bear stew as a youngin. I don't think it tasted too bad, but then we only had it that one time lol. I love all that wild life though. So glad you have things in running order again. Have a great week. Love Stacy

Here, have some of my Rolaids, left over from when my son told his teacher last year, his junior year, that he did not need to take her chemistry placement test because he was going to join the Marines anyhow. We found out when the teacher called.

It's all good now, he is a senior, is enrolled for college and has decided to go into the military after college.

But I might need some of those Rolaids back -- I also have a freshman!!

Hard to decide which is scarier - a bear in the backyard or teenage boys with motorized things plotting in the garage!!