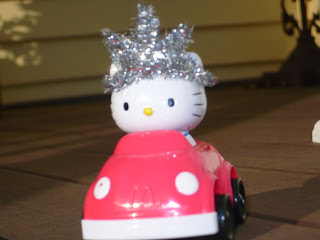 This afternoon Kitty called me .... she was VERY excited because she was asked to the PROM !!!! The Prom isn't for another month, but she wanted to come over and show me the tiara she bought today and plans to wear. (she says she's not quite sure how she's gonna wear her hair with the tiara, but she just LOVED it and had to have it for her special night!)
She was babbling on and on about this tiara and her hair and I kept trying to ask her who's her date? Who asked Kitty to the Prom? She says it's a secret ...........a mystery date. Then she asked our opinion on a dress for the prom ..... here are a few she was looking at .....which prom dress do you think Kitty should get? I'm kind of leaning toward the lilac strapless .... but Kitty doesn't have much to hold that thing up, so maybe she should go with the white organdy with spaghetti straps..... PLUS, when the dress is strapless, the "date" never knows where the heck to pin on the dang corsage ..... best to go with a wrist corsage to avoid that awkward moment ......

Ohhh...I love the red tulle strapless - Kitty can get a strapless wonder bra to help out!
And...the 'date' can get her a spray of flowers to hold or a wristlet - that solves that problem!

That Miss Kitty she is such a stitch. Hey, I am having a giveaway, come on over and bring some friends.

Ahhhh Prom. Those were the days huh?

and i was just getting used to her bathing cap!!! but the tiara is pretty grand. i just love to read about her adventures.

Jenny and I have been humming the MYSTERY DATE theme song since we watched it on your blog. HELP!! Jen also stated she liked the new haircut evan was sporting the blog before. Love ya.. also is Miss Kitty taking a Limo to the prom?