It's Captain Quilt -- (demonstrating just one of the many uses for a quilt....) 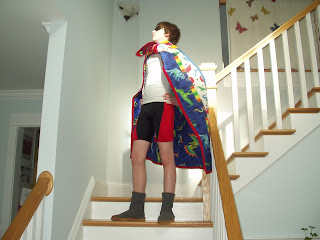 Look !! It's a bird. It's a plane !! It's a bored kid with a little too much time on his hands !! Underneath that impressive, muscular build (which strikes fear in all the cats we've ever owned) is really just Evan, aka Kid #2. This picture was taken a couple of months ago on about the 4th day of him being home sick from school (as you can see by the picture he was feeling much better and must have been REALLY bored with watching TV and playing video games, so he came up with this get up.) The quilt he is modeling (shown in the other picture performing one of it's other jobs -- that is covering a bed) was made by me for him when he was 3 years old. At the same time I also made a matching dinosaur quilt for Kid #1 (Matt) who was 5 years old. Both kids participated in the designing of their quilts by picking out all the colors for the dinosaurs. They also colored in a dinosaur label that's on the back of each quilt. Both kids still sleep under their dinosaur quilts every night --- even Matt, my now 16 year old high school junior, varsity wrestler, dirt bike rider -- still sleeps under his dinosaur quilt !!! Doesn't that just melt your heart ?!! I ask you -- is there any better reason to make a quilt !!! I think, however, that next year when Matt graduates from high school, I'll make him a "grown up " quilt since he may feel a little funny about taking his dinosaur quilt away to college !! I'm thinking of making him a signature quilt -- more on that and signature quilts (I love the history behind those!) tomorrow !! 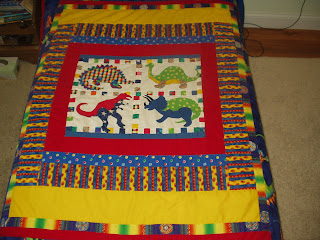 Now that's a different way to use a quilt...lol.... Found your blog through Pat's yahoo group and just had to have a look. I just adore your pink sewing room, I think I'm turning a horrible shade of green. Your garlands are just too cute, and, and, and I could go on and on, but I won't. I need you to remember that I'm an adult....lol.. Enjoyed the read and the lovely pics.

That's what every manly-man superhero needs -- his own dinosaur quilt stitched by his own mommy!!! And I can't imagine why he wouldn't want to take it with him to college... though with an heirloom so lovely and very much loved, it would be safer to keep it home.

I absolutely love captain quilt!! i have 2 boys who have made similiar uses of our quilts.
I jsut wanted to come by and thank you for leaving such a sweet post on my brand new blog, Fresh Figs. It feels so nice to hear from people who are enjoying my designs! Hopefully I will continue to inspire your crativity.

I'm totally with you on the technical difficulties of posting when you first start. I barely feel like I know what I'm doing.
Keep up the quilting,
Joanna

Hey! Just found your blog! I remember many a funny post you wrote on Pat Sloan's group and was tickled to see you have a blog!!! Will visit often. As the mother of two grown sons who lived to tell about it, I can identify!!!