Look at all this FUN STUFF from Sharon !!! 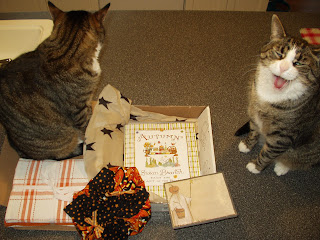 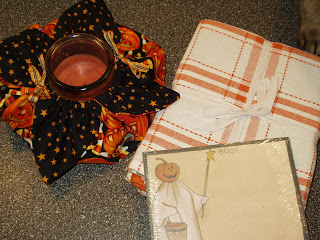 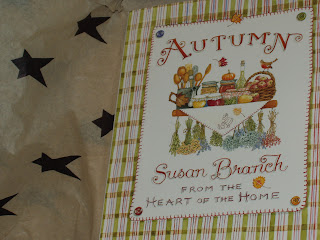 Sam and Shadow are VERY happy with the BOX that Sharon sent them !! (Look, there's Shadow hogging the box, and Sam saying "MOMMMMMM!!! Shadow won't let me have a turn sitting in the box !") I, on the other hand, am VERY happy with the stuff that came IN the box !!! That sweet , crazy gal Sharon from Red Geranium Cottage not only sent me the "Autumn" book by Susan Branch (which I LOVE !!!!), but she also sent along some fun surprises !!! (as in those nice autumn colored dish towels, that very cute Halloween writing paper, AND that sweet votive candle holder made out of Halloween fabrics (made by Sharon, I'm guessing. -- is that right, Sharon? Did you make that ? and is that what it is -- for a candle?? well, whether it is or not, I like it holding a pumpkin scented candle !!!) Everything she sent me is GREAT-- right down to that darling tissue paper with the black stars on it that she packed everything in !!! .... and, of course, the box/kitty toy !

Well, I think I'll go put a comfy pair of sweats on and my fluffy slippers, make a cup of tea (ignore that stack of paperwork that's hanging over my head --not to mention laundry -- ah yes, the Queen of Procrastination is alive and well !) and go look at my new book !! (I think I even saw a recipe for cinnamon ice cream in there -- like the kind we had the other day at The City Tavern . I never heard of cinnamon ice cream until a few days ago when I had it for dessert , and now I found a recipe for it !!!! YUMMO !!!)

How fun! That is some great stuff!!

What a wonderful box from Sharon. Love the pictures of your kitties. They both have such personality!

Mary Anne, the little halloween thing is a drawstring bag but I like the way you used it for your candle. It fit perfectly and looks cute. I may have to use mine for that now. You creative thing you.

Ah, Mary Anne, you are a lucky, lucky girl!! All those treasures from Sharon are the best!! And, your kitties look so sweet!
I'm glad I'm not the only queen of procrastination!! Sometimes you just gotta sit and relax, right?