George, Ben and Tom ate here ! (Martha and Betsey , too?) 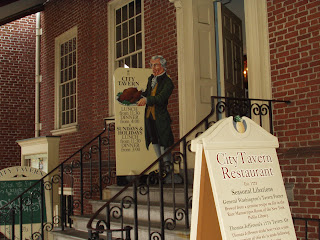 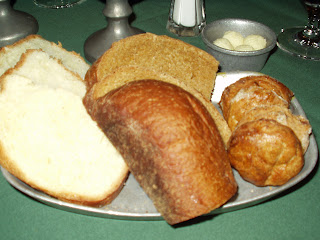 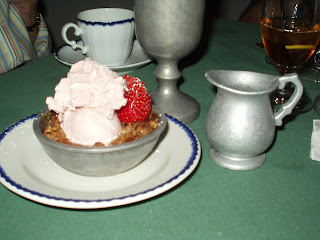 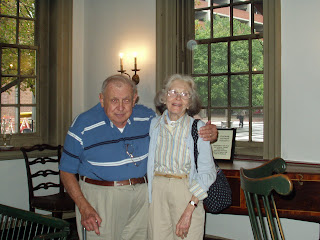 Today we were back in Philadelphia for a follow up appt for Mom. Everything went well, and she was feeling fine, so we decided to go out for a late lunch at The City Tavern on south 2nd Street. When you walk through the door, and see the waiters and waitresses dressed in colonial costumes and hear the harpsichord music playing, you feel like George (as in Washington) is going to come strolling in with Ben ( as in Franklin) to have a beer with Tom (as in Jefferson). (I guess Martha was home whittling George another set of teeth, and Betsey was busy throwing a flag together for these guys.)

Anyhow, look at that yummy bread -- all home made and served on a pewter plate (at least it looks like pewter.)Those little biscuit looking things on the bread plate were Thomas Jefferson's recipe -- they're made with mashed sweet potatoes and also have cinnamon and nuts in them. The water was served in pewter goblets ( my "colonial" diet coke, however, was served in a regular glass ....). OH !!! and look at that dessert !!! Apple Strudel (served warm) topped with cinnamon ice cream !!! VERY YUMMY !!! And there they are, those crazy kids, George(NOT Washington) and Nancy (aka Dad and Mom) posing in front of the harpsichord (I guess back in colonial days, this was considered the piano bar section of the Tavern.) So, now it can be said that in addition to George (Washington) , Ben and Tom (and I think, John and Sam Adams -- who, I guess brought his own beer) , George and Nancy can now be added to the list of distinguished patrons who have eaten at The City Tavern !

Yummmm, the food looks so good. I bet they make a good pot pie too, but that's only a guess, as I've never been to Philly.

I love places like that! Yummy! We ate in a restaurant similar to it in Boston - loved it and loved the food! I will definitely put that down on our list of things to do when we visit your neck of the woods next year!
Your folks are so cute!