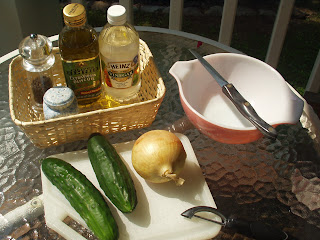 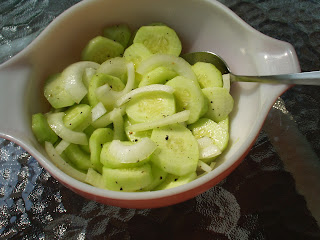 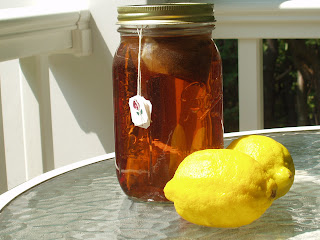 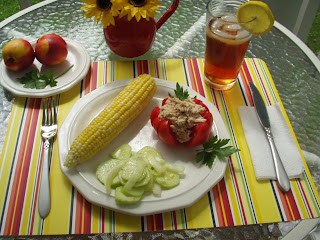 August just isn't August without Cucumber Salad. Ever since I can remember, my mom has made Cucumber Salad, especially after my dad started growing them in his garden. I've been trying to get my cucumber salad to taste like my mom's for the past few summers, but somehow it just is never quite the same.... BUT, this time I think I came closer than in other years -- (I think it's because I STOPPED measuring and just started dumping stuff in there "to taste" as my mother has always instructed me to do.) So, I thought I'd share the loose interpretation of how to make Cucumber Salad for anyone out there in Blogland who'd like to try it.

Wash and peel cucumbers. Slice cucumbers and place in a bowl. Slice onion and add to cucumbers. (I usually use about a half onion, or less for every 2 cucumbers -- but this is where you get to add or subtract however you like.) Add olive oil and white vinegar ("to taste" -- I just keep adding the vinegar until I can taste the "tang" -- just add stuff a little at a time , stir, taste, and add more if you want -- a little at a time!). Add a little salt and pepper , also "to taste". Stir , taste, add more if you want. (How's that for an inexact science?!)

So..... there you have it -- a yummy way to use those fresh cucumbers! They were great for lunch today -- had 'em with fresh corn on the cob, a tuna salad stuffed tomato, and some sun tea -- oh, and some juicy, slurpy nectarines for dessert! (I don't always get to treat myself to a lovely lunch out on my porch, but today both kids are at a dirt bike race and hubby-dear was on a "who can show off the most" bike ride with the guys, so I thought I'd actually sit down for a change and have lunch ! I must say I was very good company -- I'll have to "do lunch" with me again sometime soon!)

(P.S. -- cucumbers and parsley compliments of my dad's garden; tomato, corn, and nectarines are from the farm stand we went to the other day. That fresh produce is the BEST !!)

Wow Mare! I sure wish I could've joined you! That there is what I'd call a perfect lunch! I need to try that salad (with the 'burpless' variety) ;-)

Yummy looking lunch! I love a good cucumber salad but just can't get it right. Maybe I'll try your version.

This looks so yummy, can't wait to try the recipie :)