Mom is home and doing OK 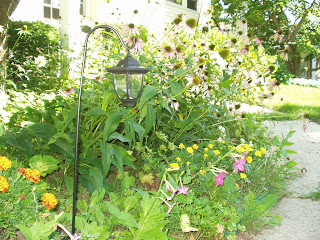 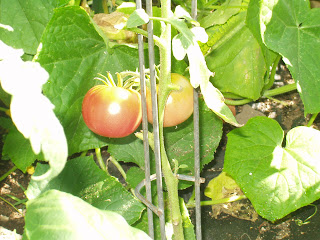 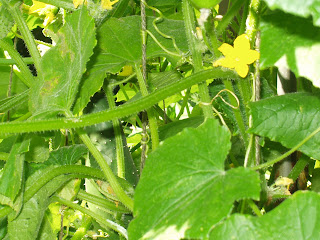 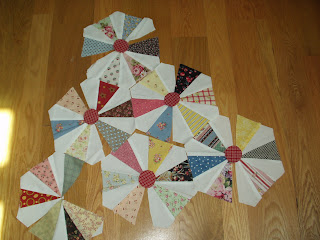 Well, you can't keep a good woman down (thank goodness!). My little, but TOUGH Mom came home from the hospital last Friday.(Mom and I want to thank all of you for your well wishes and nice comments -- they were much appreciated!) I stayed with her until last night when she gave me the boot and announced that she'd be OK with just some occasional help from Dad (aka George). (now, let's not go overboard here and think George is going to be doing laundry, grocery shopping, and making and cleaning up meals -- those things never were in his job description -- since he's a recently retired physician, he'll monitor the medical stuff -- and, continue to be the full time gardener (those first 3 pictures are just a small sampling of his flower and veggie gardens -- which are not only his passion, but his physical therapy for that darn arthritis he's got.) -- So, as I said, my Mom is tiny, but tough -- the morning after she got home from the hospital she came out to her kitchen table and sat down with a cup of coffee I got for her. I went into the bathroom for 2 minutes and when I came out where was Mom? -- why downstairs in the laundry room scrubbing George's socks and gotchies (aka underwear) before putting them in the washer , of course (old habits die hard!) -- I told her I'd do the laundry, but apparently I don't do it right -- I don't pre-scrub anything -- I just throw the white load in the washer with detergent and oxiclean and hope for the best (and my kids are wearing the dingy socks to prove it!) ANYHOW, my tiny but tough Mom is back to her meticulous housekeeping habits (on a somewhat lesser scale, however --- I make her take a rest in the afternoons, and she doesn't really argue with that) I have a feeling she'll be back in full swing pretty soon -- gaining strength for one more surgery in the beginning of October -- then she should be good as new!

Over the past 2 weeks, I did get a chance to squeeze in a little bit of hand piecing on my hurry up and wait project -- it was also my therapy (who needs to pay big bucks to a shrink!! just pick up some quilting, knitting, needlework of any sort, or go plant some flowers!)

OK -- I'm still trying to get caught up with all sorts of stuff, so I should skee daddle. Thanks again for all the well wishes for my Mom!

Toodles,
Mary Anne (aka Mare)
Posted by Mary Anne at 9:26 AM

I'm glad your Mom is home, and doing better. I, too, don't know what I would do without quilting or some other kind of hobby.

How lucky that your Mom is home and back at it... all that activity and doing and making and being needed is what keeps us alert and alive. It's just a theory, but I think it holds lots o'water. Also, beautiful pieced pieces and I am glad you are back. I missed you.

Glad to know your mom is finally home. Those blocks are amazing.

I am SO happy to hear that your mama is doing better and is out of the hospital! It's good to have you back - I kept checking to see if you were here yet. Love the blocks - they're beautiful!