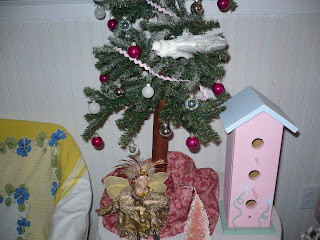 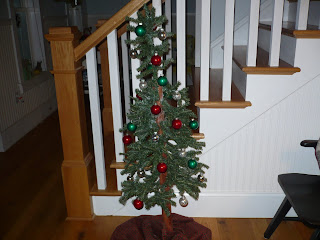 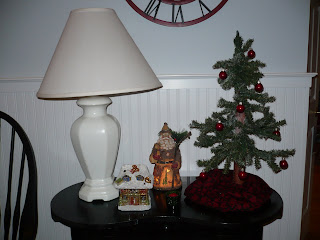 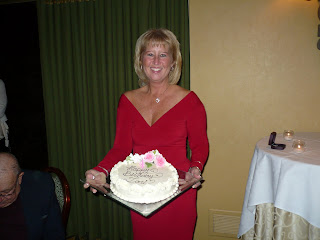 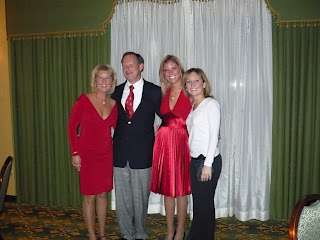 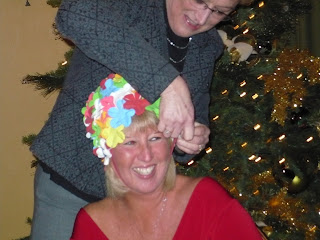 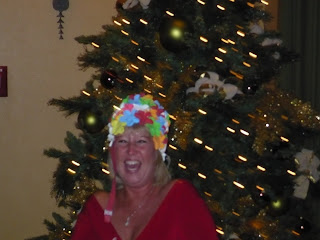 Here's an update from the Moonbeams in a Jar Tree Decorating Dept: 3 "Charlie Brown Trees" finally decorated !! The first 2 pictures are of the tree in "the useless room" (as the kids and the big cheese refer to it ). Anyhow, the Tree Decorating Dept shamelessly pilfered the idea of using pink rick rack as garland from the cover of the December issue of Romantic Homes magazine..... and, lookie there! The Golden Fairy Princess that I won from Susan is looking SO pretty sitting under the tree !! (I had to quickly take this picture since that rick rack , those teeny Christmas balls, and definately those white birds will be toast any second now , as soon as Sam, Shadow and Daisy spot them! -- but don't worry, Susan, I'll make sure the Golden Fairy Princess is kept safe!!)

Next on our tour is the foyer. (Wow! this is just like the Christmas White House tour with the Blue Room tree, the Grand Ballroom tree, etc !!) Anyhow, there are 2 "Charlie Brown Trees" in the foyer --- one sitting on the floor next to the steps (which the kitties will take out in one quick slide, and skid as they race through the foyer and around the bend chasing each other).... and the other smaller tree is on top of that table (which also has it's days numbered .... destined to be bowled over with one quick kitty leap onto the table !) (Oops ! I guess those pictures came out kind of dark --- such great photography skill ! Ha! anyhow, if you click on the picture to enlarge it, you can see the trees better.)

OK -- so much for the trees --- on to the Birthday Bash!!! Yesterday my brother had a surprise ??th (I'll never tell) birthday party for his wife, my sis - in- law, Lori at the Hotel Hershey. What a BEAUTIFUL hotel -- especially all decorated for Christmas !!! ( I had my sister take a picture of me standing in front of the 2 story Christmas tree in the center lobby -- too bad it turned out to be such a crappy picture, Boop -- I was going to try and post the picture and pass it off as my Christmas tree in my living room !!! HA !)

..... and, those last 2 pictures (Lori, you just KNOW I had to post those pictures -- and I'm sure you'll get me good next year when it's my ??th birthday!) -- anyhow, those last 2 pictures show our Birthday Girl modeling her gift from me and my sister, Boop --- yes, Lori has earned a flowered bathing cap from "The Sisterhood of the Flowered Bathing Caps" .... a very serious (not) organization started by me a few years ago evolving from my memories of all the moms at the local pool wearing those bathing caps to keep their hair dry while they did the "Mom Breast Stroke" which didn't involve putting their head under water at all -- so I guess those bathing caps were just a fashion statement! Anyhow, while wearing our flowered bathing caps at the local pool, we like to practice and perfect (not ) our synchronized swimming routines -- just like Esther Williams !!! HA ! Anyhow, Lori has definately earned a flowered bathing cap -- since she has put up with my brother all of these years!!!!

Everything looks so fun & festive. Merry Christmas to you & yours. CW

I am loving that hat!!! The decorations are pretty too. Hope you had a Merry Christmas!!

I love all your decorations - each tree looks perfect in its setting. Gotta love that hat, and Lori looks very pretty and happy wearing it! What fun!