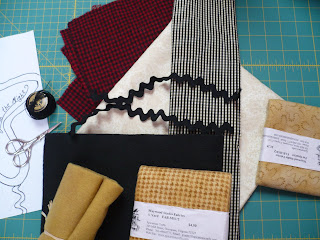 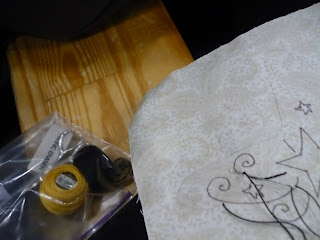 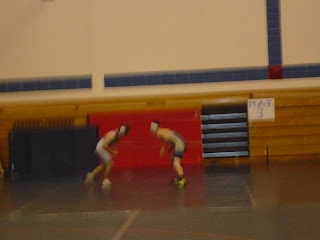 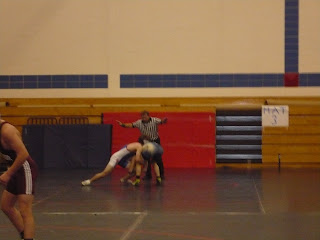 This morning I quickly got a new hurry up and wait project together -- another make-it-up-as-I-go-along Christmas "hurry up and wait project" -- because today was the start of the loooooooonnnnnnnnggggggg wrestling season and if I don't have a project to work on at wrestling matches and tournaments, I'd go completely OUT OF MY MIND !!!! This year only Matt (aka Kid #1) is wrestling. Evan (Kid #2 decided to go back to his best sport of soccer this year after giving wrestling a 2 year try.) Matt, however, has been wrestling since 7th grade , and this is now his senior year -- I can't believe it !!! -- so this may possibly be the last loooooonnnnnggggggg wrestling season I have to suffer--I mean sit through !!

So, anyhow, there's my new stitchery project sitting there on the bleachers where I occasionally put it down so as not to look too disinterested --- now, don't get me wrong -- I watch my kid's match and yell and scream/cheer with the best of them -- and for his teammates, too -- since I know all of them and they're Matt's good buddies -- but today was an all day tournament --- oh my aching butt -- those bleachers are KILLERS to sit on !!! -- anyhow, Matt wrestled 4 times -- lost 2 matches and won 2 matches( he's the wrestler on the left wearing the white and blue thing) ..... and the whole time I'm thinking about how many kids' sweat on those wrestling mats my kid is getting his face smooshed into --- YUCK !!!!! Talk about a vile sport --- UGH!!! Talk about a hot bed of germs (we've already dealt with ringworm and impetigo since the beginning of Matt's wrestling career in junior high).

...... and there's Matt when I called him over to check for boo boos (only a slight split lip and slight bruise on his right cheek bone today ) and to slather some of that "germ-x" all over his body (he pretty much blew me off and just wanted $5 bucks to get food at the concession stand -- well, I told him only if he at least washes his hands first !!!!!!!)

Anyhow, it seems I'll get more time to work on that Christmas stitchery again this week -- I just checked the wrestling schedule and it seems there's an away match on Tuesday.

I remember basketball season with Boo. Seems like it went on forever!!!!!!

I sooo do not envy you sitting endlessly on those bleachers... send mne an e4mail, I have a solution