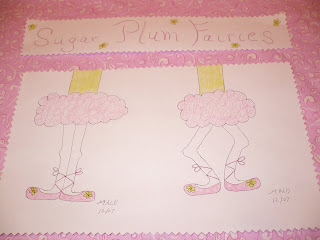 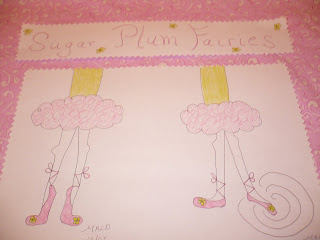 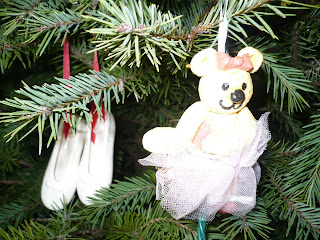 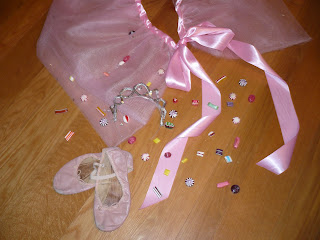 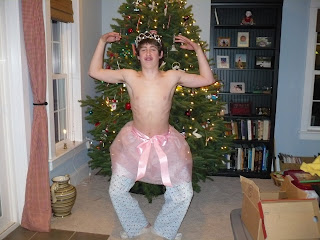 I've always dreamed of being a Sugar Plum Fairy in The Nutcracker Suite ....however,sadly for the theater-going crowd, my ballet "career" was short-lived. It began in 1st grade with a recital gone awry -- as I was twirling my peacock blue parasol, it got tangled up in my peacock blue tu tu (kind of like a fork in spaghetti) and when I went to do the grand finale arc-swoop move with that same parasol, it came flying back at me due to the elasticized waist of my tu tu . At that point, I temporarily gave up "the dance" to begin my piano lesson "career" , and to have more time to play G.I. Joe with my brother and his buddies. However, by the time 6th grade rolled around, the theater and dance once again called to me. This time, my pals Suzy and Margo and my sister Boop and I were signed up for what was referred to as "acrobatic lessons". It turns out this was a combination of forward and backward rolls and some jazzy dance steps set to tune of "The Shadow of Your Smile" -- and , yes, there was an embarrassing recital, complete with the tackiest outfits you ever laid eyes on! Seriously, we looked like a bunch of 6th grade hookers rolling around on the stage!! You could have landed a 747 with the glaring tackiness of these outfits -- they could be seen for miles and miles!! -- let me try and describe them : picture something a saloon girl would wear -- with neon green and hot pink stripes on the top half, along with a black sequin strap on one shoulder; the bottom half , divided from the top half with a black ruffly thing, was hot pink with gold metallic polka dots; to add insult to injury, there was a hot pink ruffle across our butts!! ... and to complete that hooker-look, we wore black fishnet stockings !!

OK, so fast forward to my 2nd year of college at Temple University in Phila, Pa. (yes, I once again gave up "the dance" after that 6th grade disaster -- took up cheerleading - all for show, mind you -- I never did and still don't know what the heck a "first down" is -- started the chant "First in 10, do it again" for the wrong team more than once -- I was just in it for the pom pom routines -- which I guess can loosely be put in the category of "dance".) ANYHOW, back to Temple U. -- well, my pal Robin and I had the chance to take an elective..... so, what did we take? Out of everything you could possibly think of, we decided on BALLET !!! Turns out also taking the class (and not by choice) was the Temple University football team!!! Seems the coach required them to take it -- something about improving balance and coordination. Now our ballet instructor was a tiny , VERY serious about ballet, French woman. Rule #1: no laughing during class. Rule #2: everyone MUST wear tights. Now picture BIG (as in 250+ pound) football players saying to teeny, tiny French lady "I ain't wearin no tights!" Now picture those dancing hippos in the Disney movie Fantasia... now picture me and Robin getting dirty looks from teeny, tiny, very serious about ballet, French lady when we could not suppress our snorts, snickers and wetting our pants laughter as we watched those football players try to do pirouettes ! (not that Robin and I were much better at it .... oh, and thankfully there was NOT a recital this time!!!) .

After college, my pal Beth and I and a couple other girlfriends went through what we like to refer to as our "Fame/Flashdance" phase. We took a dance class in Phila -- and I went on to further embarrass myself at another dance class out in Los Angeles when I moved there -- same type of "Fame/Flashdance" type of dance . Oh, we tried to look the part -- you know, leg warmers and jazz shoes and all ... however, that's as far as it got. I have since hung up my ballet and jazz shoes -- gone on to more glamorous stuff ....like laundry and trying to figure out yet another way to give chicken nuggets that gourmet flare..... but "the dance" hasn't completely left me ...I can occasionally be seen doing a plie' while at the sink doing dishes, then I gracefully arabesque' over to the stove and take the beans off the back burner....yes, "the dance" lives on ..... and the yearning for a pink tu tu has never left me (the peacock blue one in 1st grade was pretty, but I ALWAYS wanted a PINK one!) ...... so, yesterday I made one!!!! I finally have my pink tu tu !!! (I wonder if it's flame resistant in case I get too close to the stove while pirouett-ing from the sink to the stove to get the beans off the back burner?).

Anyhow, there's Evan modeling the pink tu tu for us (in front of the half - decorated Xmas tree and all the boxes sitting in the living room.) -- isn't he a good sport?!? I'm thinking, though, now that I have my pink tu tu, I need an upgrade on the tiara !Maybe Santa will bring me one! (after all, no self-respecting Sugar Plum Fairy would wear a tacky tiara!)

OK -- this Sugar Plum Fairy needs to hit the hay -- she's-a- pooped! ... and for all you other Sugar Plum Fairies out there , coming soon to a computer near you .... the Sugar Plum Fairy Tu Tu tutorial !!!( you just never know when you'll need a pink tu tu -- so better to make one now and have it on hand!)

brave son for letting you take that picture!
LOL
doesn't every girl dream of being a ballerina at some point!
your tree looks so pretty.
kathie

Oh Mary Ann..that photo of Evan is going to come back to haunt him at some point....LOL

I await the tutorial for the tu tu for my granddaughters (or maybe really for me? to tip toe through the sewing room.)

Tooo funny. Your son deserves an award for that picture...maybe the Academy will take note! Hope you had a great weekend. Susan

Oh, perfect timing, I just placed an online order for walpaper boarder and beddign for my 3 year old that has ballerinas on it! :)

Loved reading your story, not ever one can say they took ballet with the football team... and that photo of your son is priceless... although he may try to buy it form you one day to keep you from shoing it off to his prom date ;)

What a sport your son is! I could see mine doing the same thing! Awaiting the tutorial :-)!

Bethie from flashdance fame here.. I actutally watched the movie the other day and am still trying to figure out the lobster scene! The closest thing I have done since our days at the jazz dance studio was give birth to a ballerina. Does putting her hair in a bun and tying her tutu count as being a dancer? she had her christmas show last night and watching her made me want to check the birth certificate. Not sure where her graceful moves originated from.Love ya...

OMG that is hysterical. One of my sons would do that but not Boo. LOL!!! Evan's a good sport.

Hello I just entered before I have to leave to the airport, it's been very nice to meet you, if you want here is the site I told you about where I type some stuff and make good money (I work from home): here it is

How sweet your son looks, and what a good sport is he?!? I love your history of the dance - very entertaining!! Thank you for sharing, Mary Anne!