Last night was my kids' high school Valentine's Dance ..... a semi formal. Now, back in the day , as I recall, we girls went through quite the long list of procedures to get ready for a dance, especially a semi formal..... and, although I myself do not have any girls, I have 8 nieces plus friends who have daughters ..... and getting ready for a dance , for girls, continues to be quite the all day procedure (and probably also involves at least a couple of weeks prior to the dance, too.) Now, for those of you who do not have boys, I just wanted to share with you how teenage boys get ready for a semi formal dance ....... 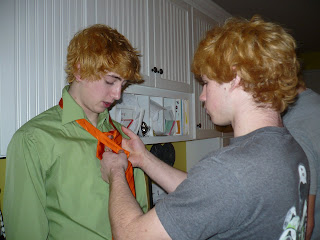 Here we have big brother Matt (a senior) trying to figure out how to tie younger brother Evan's tie (Evan is a freshman and this was his first high school semi formal dance which he swore up and down that he was NOT going to go to because "it's stupid" .... but an hour before the dance, his buddies talked him into it ..... yes, ONE HOUR before the dance.....so we rummaged around in Matt's closet and Dad's closet to come up with an outfit for Cinderfella to wear at the last minute....) (oh, and about that HAIR color ...... ugh .... we'll get to that later...). 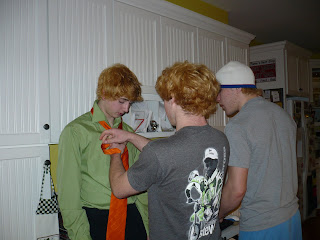 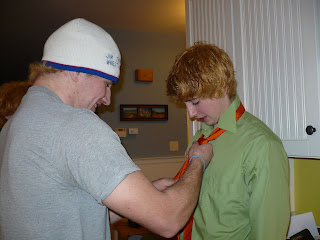 .......and here we have Ed giving it the ol' college try as he's consulting the "tie tying" diagrams on the computer screen which is on the desk behind Evan. 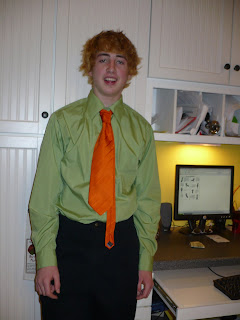 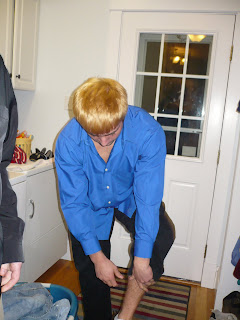 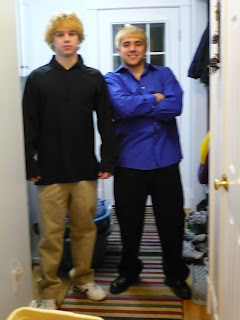 Now, about that hair color ...... Matt and his buddies Shane and Ed decided it would be a great idea to dye their hair an unnatural weird color of blond/YELLOW for the last few wrestling matches of their senior year ...... and then Evan decided to follow in their footsteps ....... and none of them took into consideration the fact that their eyebrows are still their original dark brown color and now stick out like a sore thumb!!! ....also, a few weeks ago, Matt , having inherited his father's skill for compliments, told his girlfriend that she had Oompa Loompa hair ....... (how's that for a pick up line .... telling a girl she has Oompa Loompa hair?) .... SHEESH !! and , in his girlfriends' defense, she happened to just be getting over the flu, and she just pulled her hair back at the top because she wasn't feeling up to going through the whole hair do process .... So, anyway, I said to Matt ..... now who has Oompa Loompa hair ? Hmmmmmm?!? (and that BETTER be grown out by graduation!!!)


Well, I really should remove myself from this computer ..... since I had a house full of teenagers all weekend, the bathrooms are, to say the least , GROSS !!! So, I need to put on my HAZMAT suit and go sterilize them .... yuck!!! But, before I do that , here's one more picture of my little darlings modeling their WAX LIPS! 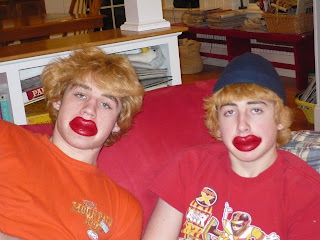 .....oh, and while I'm cleaning bathrooms in my HAZMAT suit, you should go over to Debbie's blog .....(she was the winner of my Valentine's Give Away)..... she and her hubby and kids look simply DAHLING in their wax lips!!!!

Don't even want to think about those bathrooms...you have my full sympathy..

This would be really funny, if I did not have two of those of my own! The boy (son 16) has not only made decisions to attend school functions with only minutes to spare, but also googled how to tie a tie! The girl (daughter 17), will begin preparing at least a month in advance, and it will cost a fortune. I believe we have a bit of a disparity here. Its like they are going to two different dances (lol). Your sons crack me up. Susan

Your sons are adorable! Even with big red lips, brown eyebrows, yellow hair and dirty bathrooms.

LOL!! That is hilarious, I have girls who are still too young for dances, so I know I will not be seeing this side of things and it's hilarious for me anyway. Good luck with the bathrooms.