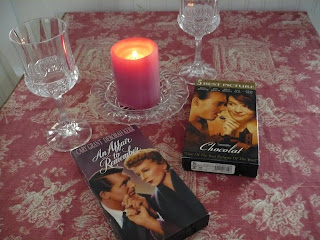 ....... here's my plan ...... after the male members of the family are totally stuffed with those chocolate covered strawberries, blueberry muffins, rice krispie cement treats AND the choclate candy I got them for Valentine's Day ..... and I send them off to bed with their Pepto Bismol ..... Daisy and I will try and figure out the stinkin' remote that goes with the DVD player and we'll sit and watch a Chick Flick !!!!


.......and since I have to choose just one movie to watch, it just has to be "An Affair to Remember" with ....... (drool, sigh...) CARY GRANT !!!!!! .... I'm partial to Cary Grant, not only because he's GORGEOUS, and FUNNY ...... but because I got to see him up close ( as in within inches of his face) when I got to serve him hors d'oeuvres (and believe me, I had to consult Mr. Webster on how the heck you spell that)!!!!!! YES !!! You read that right ..... I served Cary Grant hors d'oeuvres !!!!! Back when His Royal Majesty (aka my husband) and I were newly weds (1985) and we lived in Sierra Madre , California, my husband was the grounds keeper/maintenance guy (while he was trying to get his music career off the ground) for the British Retirement Home in Sierra Madre. Well, every year they have a formal dinner dance/fundraiser thing where the guest of honor is a British person of some degree of fame ....... and that year, somehow , they got CARY GRANT !!!!So, the president of the Home, always looking to be economical, had my husband be the bar tender (now, the only thing he really knows how to do is open a bottle of beer .... so who knows what the heck he was serving these people when they asked for a mixed drink!) .....AND, she had her daughter, Patricia (who is NOT a waitress, but is a lawyer) and me (who is also NOT a waitress other than that brief stint at Pizza Hut where I was sent home on my first day with the threat - hopefully not serious - of a contract being taken out on me by the Mafia connected manager .... that's how bad of a waitress I was) .... anyhow, the president of the Home had her daughter and I (again, NOT a waitress ) serving hors d'oeuvres . Well, let me tell ya ..... Patricia and I were keeping our eyes on the entrance just waiting for Cary to arrive ...... each one of us was determined to be the one to wait on him .... Well, the poor guy sat down and the race was on ...... Patricia FLEW from her side of the hors d'oeuvres table, and I FLEW from my side ..... both arriving at Cary Grant's table at the same time .... she shoving a tray under his nose from his left and me shoving a tray under his nose from his right ...... being the cool gentleman that he was he took some from each of us .... (BIG SIGH ) ..... and even though at the time he was in his 80's, he was STILL gorgeous !!!!!!

Toodles,
Mary Anne (aka Mare)
Posted by Mary Anne at 7:31 AM

Happy Valentines day to you too! Big Hug...Susan

Happy Valentine's Day!! I hope you get to enjoy your chick flick in peace.

Wow...Cary Grant...sighhhhh. He was so dreamy. So was Rock Hudson. And Fred Astaire and Gene Kelly when they were dancing and acting all moony over the girl.

I think our husbands don't like "chick flicks" because they can't stand to watch us get all dreamy over the men!

I love Cary Grant! OMG, I would love to have been there! Lucky you!!!

Happy Valentine's Day to you.