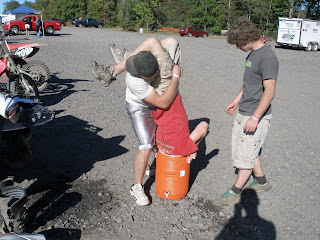 When you're the younger brother, it is best NOT to mention to the older brother and his friend (who are both wrestlers) that you are so HOT that you'd like to stick your head in a bucket of water -- they most likely will be more than happy to oblige !!!! (that's Evan being dunked by Ed, the friend, while brother Matt stands by looking oh so innocent -- don't think for a minute that he didn't help with this stunt !!!!) -- this all occurred after their dirt bike race yesterday.

(P.S. no younger brothers were harmed in the filming of these shennanigans -- in fact, he was nice and cool!)

Aren't brothers wonderful?? I mean boys??? LOL I have two myself.

Too funny! He'll never say that again, will he? LOL!