Look who came for dinner (or.....Evan makes a hoagie for the governor!) 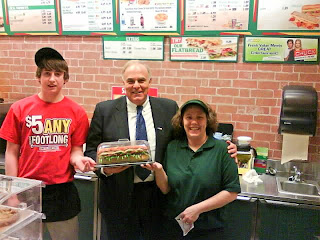 Good evening Blogland Neighborhood . We have a MBIAJ exclusive report. Today, on his 3 PM --> 9 PM shift at the Jim Thorpe, Pa "Subway" Evan noticed " a guy in a suit" walking in , followed by a couple of other guys in suits. It only took Evan a couple of seconds to realize "the guy" was Ed Rendell .... the GOVERNOR of Pennsylvania!!! Evan, not one to be shy, asked one of the other guys in suits (who Evan states were secret service guys because one of them seemed to be talking into the sleeve of his jacket....) to take a picture of him, his co worker Jean and Governor Rendell with his cell phone. Governor Rendell also gave Evan his autograph .... (so between the picture AND the autograph, Evan is counting on some pretty hefty extra credit points tomorrow in his history class!)

Anyway , back to our exclusive report of the details that you will only find here at MBIAJ ..... what kind of hoagies (that's "subs" to those of you not from this part of Pa) did Governor Rendell and his "secret service guys" order? (and just to be perfectly clear on the facts here .... Governor Rendell's hoagie was made by Evan's co worker Jean .... whose first day of work at Subway was today .... not bad to make a hoagie for the governor on your very first day of work!!) ..... Evan made the other guys' hoagies ..... they all had meatball hoagies AND they ate them WITH A FORK !!! Yes ... that's right .... you heard it here first ..... Governor Rendell and his "guys in suits" ate their meatball hoagies with forks ....(our guess is that they didn't want to drip sauce on their ties ....).

Be back soon!
Toodles,
Mary Anne (aka Mare)
Posted by Mary Anne Drury at 8:49 PM

how funny it was her first day...and she made HIM a sub.

What an awesome experience for your son!!! A day that he'll remember always ... a story he'll one day tell his kids and grandkids. Pls tell him I said "that is just waaaaaayyyyy tooooooo cool!!!!"

That is way too cool!! What a cute story!

I love how he wasn't afraid to speak up and ask to have his picture made with him.

That is pretty nifty, Evan. Good for you to seize the moment!

How TERRIFIC for Evan and his co-worker. Now...if the governor ever gets a national office, Evan can say, "I knew him when he was just sitting around eating his meatball sandwich with a fork!!!" :)

Sooo ask Evan if I can have HIS autograph?? He's famous now too.

That is awesome. Lucky Evan to be so swift on the uptake. I remember when Chelsea used to come into the restaurant where I worked. She had very young , cute Secret Service guys but geez, don't they teach those guy about being discreet? Hello doofuses - suits in Silicon Valley with black wires hanging out the cuffs? Not so much.