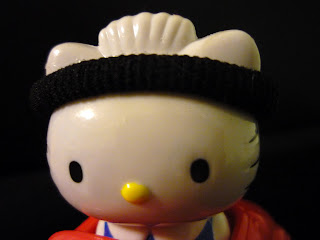 Hi there Blogland Neighbor-hood! OK, so we've got another holiday season under our belts .... literally !! AND, it's the start of a new year so you know what that means ...... time to get in shape (again ..... ugh! ) Anyhow, Kitty's got her game face on because she (and I) are taking on Sharon's Weight Loss Challenge. As a matter of fact, everybody seems to be getting in the act from Martha Stewart to Oprah.

Anyhow .... today Kitty and I decided to get back to our exercise routine (which was sidelined for the past couple of months due to foot and ankle pain, the holidays, and a nasty case of "oh who cares" )so we did a half hour of cardio .... 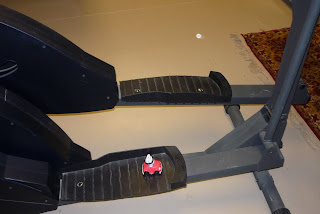 ...we divided it up between the eliptical trainer and.... 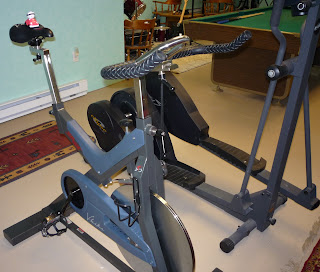 ...the stationary bike ....(but I'm pretty sure Kitty was cheating because she never did get out of that car....) 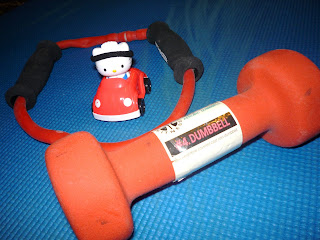 .....we followed the cardio with some strength training with free weights and an exercise band ..then a teeny bit of pilates and yoga stretches ..... and all of that was followed by a dose of Advil and an ice pack to my right heel/ankle.

Now, Kitty and I know fitness isn't just about exercise, it has to be combined with a sensible eating plan. I have done Weight Watchers online for about the past 3 years .... and I did very well with it until..... I got bored of counting points .... counting, counting, counting , COUNTING EVERYTHING !!!! AAHHHHHHH!!!!!
One day I just stopped ..... then I started having ankle and foot pain and couldn't continue my 4 mile walk/runs 3 days a week .... I would end up limping on mile #2 ..... so, like Oprah, those pounds just flew back on ..... again..... OK, so, what to do, what to do , what to do...... I guess Weight Watchers (those point values are pretty much ingrained in my brain) ... but this time instead of using up my points on crap, I'll try and make sure they're used on healthy foods (with the occasional ..... and that's the operative word here .... OCCASIONAL bit of crap/goodies..... cause too strict and I say NO FUN .... FORGET IT !)

OK, time for me and Kitty to hit the showers !

i joined sharon too. holy smokos you kicked booty on the exercise! i need to get that kind of gumption. i have a major crap tooth too - one of the things i've had to do because of becoming vegan is to make my crap and you know what, it's less crappy. :)you can find recipes for just about anything and if you input it at recipezaar they will calculate the nutrition facts for you.

Look at all that workout equipment. Way to go!! Kitty's right, give away that chicken fat! I'm so proud of you MaryAnne!!!! We can do it.

What!? No Kitty shower scenes...ha.

Looks like the fat could just burn off by looking at all of that work-out equipment -- if only it were that easy!

I am following WW...we can do it, Mare! I love your theme music, you funny duck...or should I say chicken!

threw out old scale from kauai...was all corroded and yukky from salt and rust, mark made me buy a new "better not bring home a digital". this is gotta be the year i get it together.....good luck you and miss kitty