Good morning Blogland Neighborhood! After a VERY rainy weekend, we're having a BEAUTIFUL sunny, breezy, cool Monday and it should be perfect weather for Evan's soccer game tonight.

It was ashame that it was such a rainy weekend since it made for a VERY sloppy dirtbike race (or I should say mudbike race) yesterday for my boys (well, at least I was excused from THAT!!! the race was 3 hours away near New Berlin, NY, .... so , my new rule is that if it's more than an hour and a half away , I'm excused!)

Anyhow, I had a fun Saturday afternoon at The Quiltery where I was part of "The Fall Foliage Open House" showing some of my Fall projects and people were nice enough NOT to ask..... 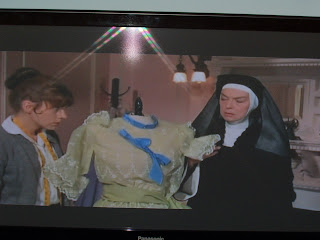 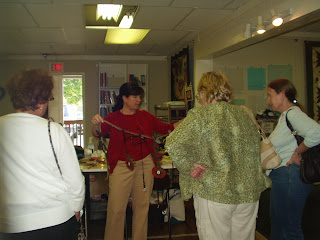 ......OK, so it looks like they're THINKING "what is it?", but at least they didn't say it out loud! (yes, that's me, trying to suck in my stomach while explaining that "it" is a pumpkin garland ) 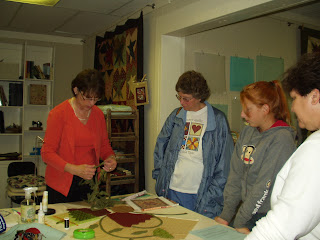 Cheryl (who I apologize to because I was too disorganized to get her picture.... also, because it was the first time I met her and didn't want her to think I was weirder than I am.....) was demonstrating a curved ruler for making scalloped quilt borders. AND, Kelly (who I also didn't get a picture of in her natural habitat) was demonstrating her long arm quilting machine .... which she let me take for a spin!! I REALLY had fun with that!!! There I was zipping along happily writing things like my name and little squiggles when I broke it ....uh oh.... turns out the bobbin was out of thread, but I decided to step away from the expensive machinery.....

Anyhow, besides fun quilting , fabric stuff, there was .......FOOD! 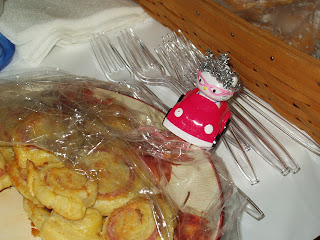 ......which, of course was where Kitty spent much of the afternoon (notice she's still wearing her PURCHASED Homecoming Queen crown! Some people just don't know when to give it a rest!)

So, all in all, the Fall Foliage Open House was fabulous, dahhling.... simply fabulous!!! .... and, now I must get to my "to do" list since I spent about an hour and a half on the phone with my pal Beth before I came "on the air" here to chat with all of you .... I think I'm now all blabbed out ... at least for today! Be back soon!

Toodles,
Mary Anne (aka Mare)
Posted by Mary Anne Drury at 10:34 AM

Ha ha - I just watched "The Trouble with Angles" and tivoed it for my daughter who has never seen it! One of my favorites!

Look like it was a lot of fun!! Wish i could have been there! :o)
I would have known what it was!!

Looks like everyone had a fun time-including Miss Kitty.

Miss Kitty seems to always know the best places to hang out. She rolls with the sweet rolls.