The vine that took over the chair & some dancing men!

Good morning Blogland Neighbors!! It's another beautiful summer day here in Pa.....bright sunny days and low humidity!! .... and the NIGHTS!!! cool and clear with a BRIGHT full moon!!! I'll be quite happy if that humidity stays far away!! Anyhow, a few days ago I accidently knocked a hydrangea bloom off of the tree, so I put it in a mason jar and set it on this chair on my front porch...... 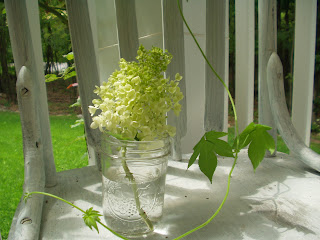 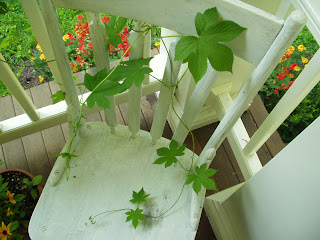 .....it's a rather pushy plant and it has wrapped itself all around the chair back so I decided I better move the hydrangea to higher ground before it gets taken over by the vine! But ya know what? I kind of like the way that vine/weed looks with that chair, so I think I'll leave it that way ..... like they say, beauty is in the eye of the beholder!
Now, let's see .... next on the agenda ....... 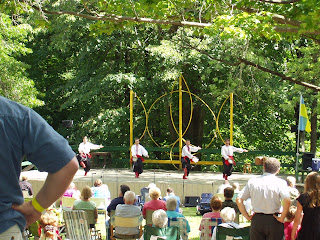 ...DANCING MEN !!!!(if you click on the picture you'll be able to see it better) 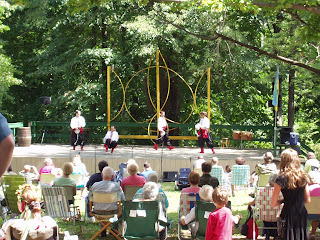 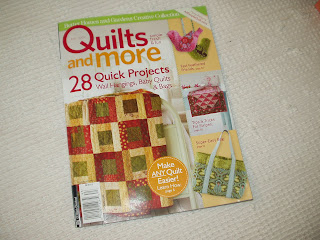 ....the new Fall issue of "Quilts and More" ....featuring 2 great projects that I just love designed by none other than Monica ..... that Happy Zombie ! Monica has designed 2 different styles of tote bags for us ..... one is a nice sized tote with 6, count em SIX outside pockets .... now I don't know about you, but it seems like I went from diaper bags (quite a few years ago) to purses that are equal to or bigger than diaper bags because it seems the men in my life can't seem to hold their own keys, wallets, checkbooks, sunglasses, water bottles, ipods, cameras, and cell phones!..... so, I'm always looking for a cute purse/tote that has plenty of compartments to put all of the paraphernalia that I just can't live without when I leave my house! (now I realize that I should just tell everybody to carry their own crap, but with Monica's pretty and functional tote, I guess I really won't mind being the pack mule !)
Anyhow, Monica's other tote is a pretty alternative to those plastic grocery bags! .... and, actually she says she originally made these as a gift bag to put a finished loaf of Amish Friendship Bread in, along with a jar of the starter batter and the recipe printed on a pretty recipe card. I wish I had thought of that .... being the "no frills " gal that I am (translated as too disorganized to bake the bread AND think of a cute way to wrap it up AND then acutally sew up a tote bag too!).... I just gave out the starter batter in ziploc bags with the recipe printed out on a piece of paper with the dates scratched out a few times .... hmmmmm..... I like Monica's way better!

OK ..... I guess I should tell you who those dancing guys really are .... they are the Kozaks who were appearing at the Ukrainian Folk Festival at the Ukrainian Homestead in Lehighton, Pa this past weekend. They were very entertaining to watch but I'm thinking they're all gonna need total knee replacements in about 15 years!!!!!

Gotta zoom! Be back soon!

Toodles,
Mary Anne (aka Mare)
Posted by Mary Anne at 8:54 AM

I just love the whole issue! There are so many things I love in and want to make. the cover quilt, both those bags! I love Friendship bread, but I hate how it is like the song that never ends.

Love the chair! I've got to get that magazine...soon! Maybe I can put all the jellies I've been making into a tote...hmmmm, another project!

I am going to Joann's this week and hope to get the new quilts and more mag with my 40% coupon...since my subscription expired. :o(

The chair with the hydrangea and the vine was so very Martha Stewart, doncha think?

I love the dancers, but my knee hurts just looking at it!

I need to get a copy of Quilts and More!!! Great photo of the chair, and I agree the vine looks wonderful wandering around it!!!

I love that chair and the vine! I'd plant myself on it - but then I'd look like a weed.

Gushing over all the baggie love you gave me - smack-kiss-hug! Cracking up... I haven't used a diaper bag in 16+ years, but still feel the need for one. Boy-folk at my house are the same way. I've resisted going to one of those big bags, but for now I suffer with an overflowing purse like George Costanza's wallet.