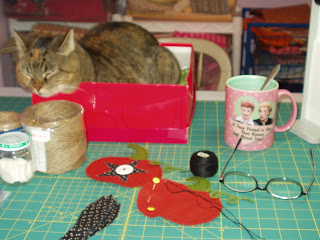 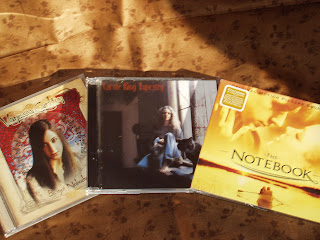 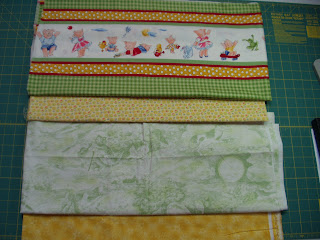 MBIAJ (Moonbeams in a Jar) Pink Sewing Room Update ---- So.......what went on in the Pink Sewing Room today you ask? Well..... being the "always running late by at least a month or more holiday slacker" that I am, it wasn't Christmas project sewing (oh, no I save that for the week before Christmas -- I know, not a good plan, but I seem to work best under intense pressure! That's not saying I finish in time for Christmas, but I sure do give it the ol' college try!!) Anyhoo, Daisy and I were working on a project that we're now going to declare a new holiday for (more on that later this week, maybe....). .....And the music playing in the Pink Sewing Room today was ..... also not Christmas music .... it was a little Vanessa Carleton (I would LOVE to be able to play the piano like her!!); my all time favorite classic from college days Carol King Tapestry (I'd like to be able to play the piano like her too!!!); and the soundtrack from a good tear jerker of a movie, "The Notebook" --- love those songs from the 1940's.

Oh, and Daisy , you'll notice, as usual , has made herself quite comfortable in that red box. My brother-in-law's wife, Lisa surprised me on Thanksgiving Day with that box filled with the cutest fabric !!! (that cute stuff in the last picture with the piggies, etc). Thanks Lisa!!! (and Daisy is loving the box and sending purrrrrrs and contented kitty thank yous to Auntie Lisa)

Well, I've been playing around all day and not doing anything I'm supposed to be doing --- like going to the grocery store. I'm feeling an angry mob breathing down my neck (that would be the teenage boys and friends) because the cupboards are bare (or at least bare according to them -- the cookies, and other teenager food groups are gone.)

Wanted to say hello and tell you I really enjoyed visiting your site. Your cat seems to be a real character!!

Couldn't help noticing your I Love Lucy mug in the photo.

OMG the movie the Notebook......that was a very good movie. I'll have to look for the cd. of music. Diasy looked very comfortable in that box. LOL I too love the I Love Lucy mug!!! I must find one of those. Actually I need two of those.

My first visit! Good to hear I'm not the only one who work best under massive pressure! I'll be back to visit!

Love the new fabric! Hey, Daisy looks comfy and cozy in the box!

Congrats on winning the Bundle of Pink on Sharon's blog! WooHoo!

Thanks for offering to hook me up with the Quilting Mob - may have to take you up on that one. LOL

Love Daisy's photo - would love to know what she is thinking. Lucky you to win Sharon's giveaway!

Daisy always cracks me up! Love the piggie fabric...and I am in complete sympathy with trying to keep the kitchen stocked with teenage food. They should just have a dump truck back up to our houses filled with anything that can go from bag to mouth.(cookies, chips, crackers, pretzles, and for the girls...chocolate). Gotta love those teenage appetites. Susan