Happy second day of fall ...... and a call for quilt blocks for a fallen hero

Well happy second day of fall Blogland Neighborhood ! (I meant to do a post yesterday with the title "Happy First Day of Fall" but as noted in my previous post, we here at MBIAJ Headquarters seem to have a "time management problem". (sigh) One of the contributing factors to the time management problem around here is getting lost in Blogland. Having a cup of tea and setting a time limit to reading blogs, facebook, and emails ONLY until that cup of tea is finished just isn't working. There are SO many fun blogs and talented people out there that it's easy to get sucked into that gaping black hole of cyberspace and information overload - so much that hyperventilating and the need to breathe into a paper bag is imminent ... and, unfortunately, sometimes we come across some not so fun things .... some very sad things .... where a Blogland Neighbor John'aLee is asking for help..... 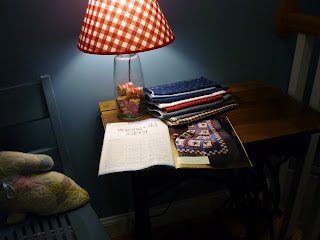 ...to gather up some red, white and blue fabrics and make a star block or two for a quilt for her daughter Tory who was supposed to get married this past weekend, but went to her fiance Chris' funeral instead because he was killed in Afghanistan 2 weeks before their wedding. How terribly, awfully heartbreaking and sad. John' aLee is trying to get enough quilt blocks together to make a quilt for her daughter, Chris' mother, Chris' two brothers, and Chris' best friend who was with Chris in Afghanistan when he was killed. You can click on this link for more information on the star blocks.

Another Blogland Neighbor we came across who could also use our support is the very funny Megan of The Bitchy Stitcher. She has come up with this HYSTERICAL calendar: the "2012 Quilter's Shirtless Man and Spicy Burrito Calendar". Oooh La La !!! 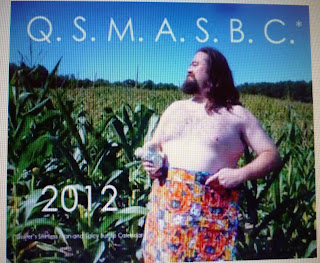 ...the calendars are for sale and the proceeds will benefit Megan's older brother and his family. He has been fighting brain cancer since January 2010. Here is the link to buy a calendar. Megan says she plans to do another calendar for 2013, so all you gals out there can volunteer your studs to bare all and wrap up in a quilt for a good cause !

Well, given our history of time management difficulties, guess we'd better step away from this computer, and maybe start planning and making a star block or two since the end of October will come around sooner rather than later.

Be back soon!
Toodles,
Mary Anne (aka Mare)
Posted by Mary Anne Drury at 9:01 AM