OK .... typical day .... I came home from work about 5Pm ..... decided to go outside , walk down the driveway to get the mail before I go out for a longer walk for an hour ..... as I'm heading down the driveway my next door neighbor , Tim came calmly walking over to me and said "I'd wait to go get the mail if I were you." ... I, being typically unobservant, asked "Why?" He answered and pointed "because Jim, across the street has a mama bear and her 3 cubs up in the tree right next to his garage ..... you do NOT want to mess with a mama bear with cubs .... she's pretty darn mean and dangerous" ..... so, I decided the mail and the walk could wait, but a PICTURE could not .... 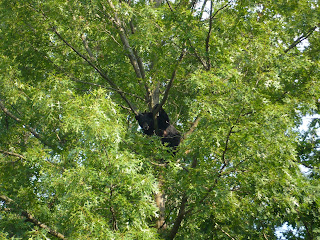 .....(if you click on the picture to make it bigger , you'll be able to see Mrs. Yogi better ..... I wasn't about to become dinner for the bear family, so I used the "zoom" on my camera and kept a neighborly distance!) 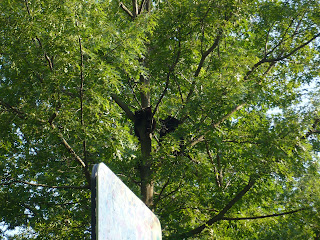 ...if you click on this picture to make it bigger, you'll see a big dark blob --- that's mama ...and to the left of her and slightly higher are 2 smaller dark blobs .... those are 2 cubs kind of hanging on a branch of the tree .....Anyhow, here's how the bears ended up in the tree in the first place .... Jim came home from work and pulled into his driveway to find Mrs. Yogi treating her cubs to a lovely dinner out of Jim's garbage cans .... which included the remains of Jim's wife's birthday cake ... he said the bears had icing on their faces .... anyhow, when he pulled into the driveway, he beeped the horn hoping to scare them out of his yard so he could get out of the car and call the game commision guy (a couple of years ago, Jim's dog, a yellow lab, surprised a mama bear who attacked the dog .... so Jim was in no mood to mess with this bear ) .... anyhow, the car horn scared the bear family ... but right up the tree where they stayed for 2 hours !!!! (and during that time, the game commision guy never did show up! ..... but lots of neighbors did! 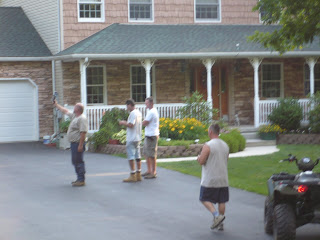 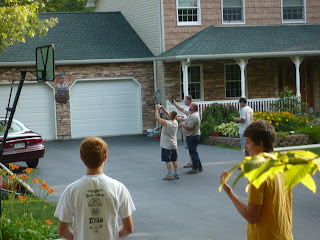 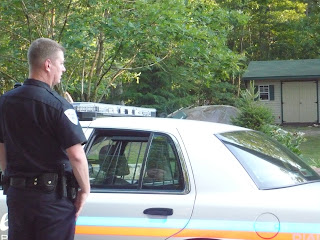 ....one of our local police officers (who happens to live in our neighborhood and wanted to know where the heck these bears might be headed next) stopped by .... but wasn't able to do much except call the game commision guy again.... and keep a safe distance!!! By this time, the bear family was getting a bit restless and tired of holding onto a tree branch .... they started moving down the tree and ..... 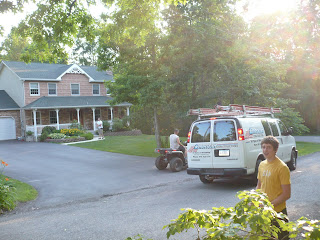 ......nosy neighbors SCATTERED !!! look, that guy hopped into his van and he's about to burn rubber ... and that other guy jumped on the 4-wheeler and is revving the engine to peel out of there if mama heads his direction !!! even the cop made a beeline for his car!!!(hey, what the heck! you at least have a gun ... all I've got is this camera!!) .... and , yes, that's Kid #2, Evan in the yellow shirt who I'm screaming at to GET OVER HERE !!! .... and he, in typical teenager know -it - allness, said that the bear would run AWAY from all of us .... well, he was almost right ... all the noise scared Mrs Yogi and cubs back UP in the tree!!! So, about another 15 minutes passed while the bear family stared longingly at the rotting birthday cake with all that yummy rotting icing from up in the tree (actually, I can sympathize .... many a time I've stared longingly at a good blob of icing ..... I know how that can be .....) Anyhow, as nature would have it, there was another reason Mrs. Yogi wanted down from that tree .... she had to POOP!! well, when ya gotta go, ya gotta go!!! what's a girl to do ? .... well .... POOP from up in a tree , that's what !!!! So, now Jim's really pissed !!! Not only does he have garbage all over his driveway to clean up, he now has BEAR POOP to clean up in his yard!

Finally, one of the cubs just had enough of staring at that lovely rotting cake from afar and just shimmied down the tree and grabbed some yummy bit of garbage and ran back up the tree!!! Then a little while later another cub came down and then mama decided to come down before the kids ate the whole thing and didn't leave anything for her! (again, I can relate!) 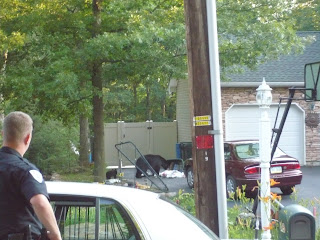 ....(if you click on the picture to make it bigger, you'll be able to see that Mrs. Yogi is just to the left of the car in the driveway and one of the cubs is behind her .... the other 2 cubs were still up in the tree)

Anyhow, eventually Mrs. Yogi and the kids were tired of being the center of attention and took off behind Jim's house .... into the woods .... and came up behind MY HOUSE !!! so, again I'm yelling at Evan and his buddy to GET UP ON THE PORCH and DON'T PISS OFF THE BEAR !!!! .... well, with all my yelling, I guess Mrs. Yogi decided it wasn't the pleasant mealtime atmosphere she was looking for and herded her kids/cubs back in the woods ..... and the game commision guy never did show up!! .... so , I'm sure we'll be seeing alot more of the bear family!! So much for my hour long walks!!!!

Cool! Have only seen bears in a zoo!

Great shots of Mama Bear and her cubs. WOW! What an experience!

Whoa! Lions and tigers and BEARS, oh my! Oh well, at least now you have a good excuse as to why you had to eat all the cake!

Gee whiz, Mar. You have such excitement at your house! Bears, who would've thunk it!

Oh Mare...this is a beary scary story, but the way you share it, it's quite humorous. As cute as those cubs are, bears are very dangerous. So be sure to hang out your "No Bears Allowed" sign (I'm sure bears can read.) for your 4th festivities!

Exciting times there! I am surprised Miss Kitty didn't zoom up and take matters into her own hands, er paws. Well, maybe she would have helped with the icing.

OMG I'd be sending the son in the yellow out for the mail from now on. LOLOLOL!!!!

Andrea - Under a Blue Moon said...

And here I was all excited and overwrought about a bat getting into my house. I have to laugh at the irony of you fussing at your own cub while Mrs. Yogi was tending to hers. :)

mark saw a black bear crossing the hiway less than a 1/4 mile from our house. i know there are bears in da UP but not that close! we are surrounded by woods so only god knows what the heck is in there besides stupid deer. dropped off the sample to escanaba and i didnt take a picture of it, darn it! glenna gave me one of her patterns and two pieces of batik to use with some of my hand dyes out of my stash to make another sample...i was going to buy the pattern and use my batiks and she says, how bout i give you the pattern and two pieces of bali...ah, sure, yeah, no problem. i am gonna have another fun day tomarrow. yipee!

Well now that was some excitment! My Mother in law has bears often at her house and they do skimmy up the trees. She even lives in the city limits. Crazy!

You had me actually laughing out loud at your bear story! Good thing I was all alone in my computer room, or instead of the gaming commission, the men in the white coats would be visiting my house. LMAO! :o)

Such excitement at your place! I had to laugh at your bear story - too funny, even though at the time, I'm sure you didn't see a lot of humor in the situation. Thanks for sharing! I can relate - I have also stared longingly at frosting! LOL

Amazing! So much excitement. Loved looking at all your pics and reading about it. Where's Miss Kitty while all this was going on? Hmmm... is she a scaredy cat? Ok, I know better than to taunt Miss K. I'd be scared too.

Ha... I think you need to get yourself a Get Smart style gun-n-camera-in-one!