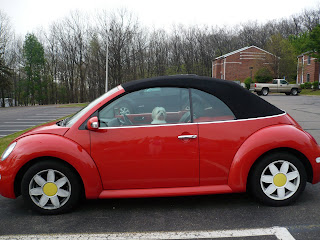 I spotted this yesterday .... CUTE car (look at those daisy hubcaps!) and an even cuter pooch inside !!! (it was only 59 degrees out yesterday morning when I took this picture, so the pooch was not in any danger ... and the owner came back right as I finished taking the picture) Anyhow, this cuteness was sitting in the Hazleton Penn State campus parking lot yesterday morning when Matt and I arrived for the day long orientation session (see, just being in the PARKING LOT of a college campus has made me smarter .... note math reference in my title!!)

OK ... gotta zoom to work .... then more work on the graduation quilt (which probably won't be until late, late , later tonight!!! .... after much caffeine!)

Be back soon!
Toodles,
Mary Anne (aka Mare)
Posted by Mary Anne at 9:06 AM

Love it...so cute. The wheelcovers are so sweet...never seen ones like that before. Its kind of nice to see a 'girly' car!

That really is 2cute~

daisy rims.
who would have thought???

OMG I need that car and those hubcaps. OH and the cute little doggy too. Adorable!!!!

I love it!!! Those daisy hubcaps are so darn cute!