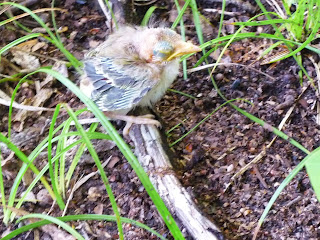 Hello out there in Blogland !! We've had a bit of excitement here at MBIAJ Headquarters ...... this little bird has dropped into the midst of the usual chaos going on around here ..... fell out of his nest and has been chirping up a storm..... 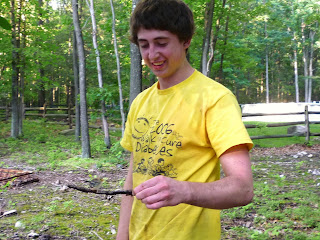 Evan has taken a particular interest in the little guy ..... and this little guy looks at Evan expectantly chirping Are You My Mother? (isn't he cute ?!?!!! .... thanks to our cracker jack photography dept it's hard to tell from this picture, but the little bird is perched right in the center of that stick that Evan is holding .... if you click on the picture to make it bigger, you'll be able to see it better) 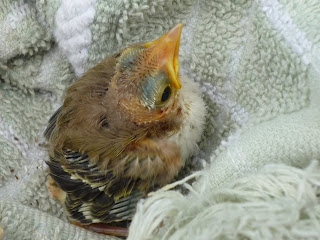 ....and here he is all snuggly on a towel in a box in the garage for the night after being fed some delectable chopped up earth worms on a stick by our neighbor and Evan... tomorrow we'll figure out if we should take him to the local environmental center or see if Mama bird will take care of him. 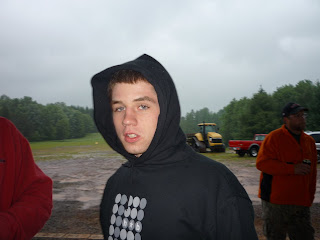 .....this past Wednesday we celebrated Matt the college boy's 19th birthday !!! ....and guess what he's learning to do ......FLY !!!!... as in a small airplane !!! So far he's had 1 ground school lesson (he and his instructor weren't able to go up in the plane because it was POURING !!!... 2nd lesson had to be rescheduled because of fog ..... and this picture was taken this past Wednesday, June 17th, on his birthday at a "Fly In" where many small planes were supposed to "fly in" for a picnic/bbq ...... well, it was practically a hurricane, so all of the planes were grounded and the pilots all drove to the picnic instead ....at this rate of weather UNcooperation, Matt will be celebrating his 90th birthday before he actually gets up in a plane for his lesson (which is OK with his Moonbeam Mama who is going gray fast enough from the dirtbike racing he and Evan do ....and the flying lessons will definately expedite the whole graying process ...... probably cheaper to just decide to live with the gray .......)

Well, time to go check on the baby bird then hit the hay ..... I'm guessing we'll have to be up early digging up some worms for breakfast.....

next picture should be our dear Evan showing little birdie the ropes of the forest. The what and what not to do's when leaving the nest, and how important it is to check in from time to time! :)

Matt and baby bird = cute! Learning to fly? Super cool...maybe the baby bird was trying to give him some flying lessons. My daughter turned 19 the same week...it is all so bitter/sweet....watching them grow up.
♥, Susan

Your boys seem to like the dangerous things in life. Wait until they have children and they might change their minds about this daredevil stuff. Good luck with the baby bird.