Happy Friday Blogland Neighborhood! Hope you all had a nice Easter or Passover and a good week. Oh, and Kitty was just tickled pink that you all loved her Easter bonnet!

Well .... today's topic is GUILT ! We here at MBIAJ Headquarters are amazed at what can be accomplished when driven by guilt ....(that's Guilt not Quilt). For us here at Headquarters, that "guilt" is the lack of employment (the kind that comes with a paycheck) for the past 3 weeks, and on and off before that for a couple of months due to decreasing referrals to the homecare agency I have worked/contracted with for the past 14 years. In addition to the very time consuming job search for something that doesn't involve commuting at least an hour or more, the interview process and the tons of paperwork that goes with that....time has been spent cleaning things normally ignored .... this is DEFINATELY guilt driven !!! WHY you ask? Well, because this morning after the gang left for work and school, and we (me and my "staff") had yet ANOTHER day stretching out ahead of us the first thing that crossed our mind (like the other days of unemployment) was "an entire day to sew and draw ! YAY!" .... but just as fast as that thought flitted through our brains, the GUILT monster came and knocked it clear across at least 5 states ..... that little "Guilt Voice" kept saying ... "how can you sit and do something fun when you aren't bringing in a paycheck? You should at least clean some stuff that usually gets put on the back burner when you're too busy working to clean it (including the back burner!!) So today's gross cleaning project, fueled by guilt was .... 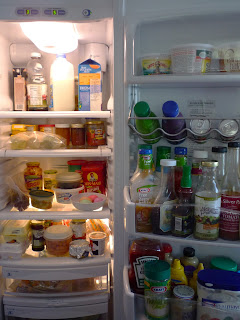 .....cleaning out the fridge (and trust me , it needed it!!) (and don't look too closely because I didn't feel THAT guilty to do a thorough enough job to pass Martha's standards...)


Anyhow you'd think with the free time left over after the job searching aggravation and all the cleaning, cleaning , cleaning (which by the way has come to be known as the "Thankless, viscious cycle " .... because it IS !!!) alot more would have been accomplished on ...... 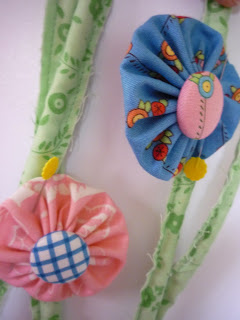 .....the "fabric covered button/yo yo project" (which is lingering and hopefully won't be dying a slow death in the UFO pile)..... and I KNOW that next week when hopefully the employment issue has been resolved and it goes from one extreme to the other (i.e. no work vs. so busy there's no time to blow your nose) that I'll be kicking myself .... just KICKING myself for not ignoring those dang GUILT feelings and saying to $%@& with the cleaning .....I should have spent the time SEWING and DRAWING instead !!! (but that's not what I was taught at "Our Lady of Perpetual Guilt" by Sister Mary Martyr.....)

OK, it's a GORGEOUS day outside so it's time to haul my butt outside for some fresh air and exercise .... then later I think I'll have some whine with dinner!!!!

It's funny but I was going to post something about that "guilt" that you feel every time you do something fun.

I think you need some fun for yourself since you have been under so much stress. Put the timer on for 15 minutes, clean for that amount of time, and go sew for an hour. Just keep rotating that and you'll feel like you got something fun accomplished!

Dont beat yourself up too bad over there. Sewing is much more fun. Trust me. lolol But I'm paying for it big time now. Instead of cleaning it up I'm throwing it out. lolol Give that a try.

HA! Do you watch Jon & Kate? "to do a thorough enough job to pass Martha's standards..."... I think Kate holds the highest standards. And she'd have a coronary if she saw my fridge.

And I hope your yo-yo project doesn't die a slow death... I WANT TO SEE MORE! What you have so far is DARLING!