Pysanky, Pierogies, and your Easter Babushka ..... 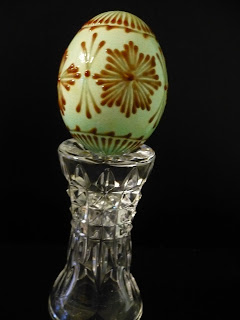 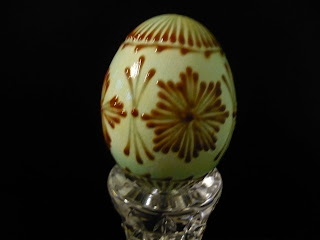 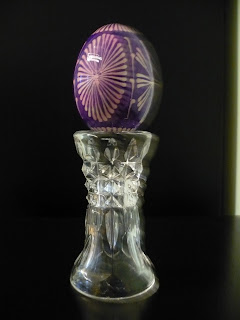 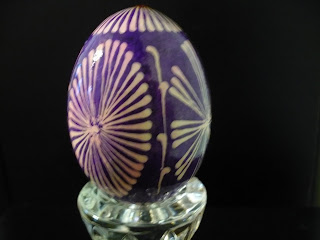 Aren't these Pysanky beautiful?!?!!!! They were given to me last week by an 81 year old man who makes them every Easter season for his church !!! He and his sister were taught by their Slovak mother. After some chatting with him we figured out that his mother and my great grandfather were practically neighbors in "the Old Country".... that being Ruthenia (don't go looking for it on a map, cause it's not there anymore .... well, it is, but it isn't .... now it's Slovakia .... I think ....). ANYHOW, he told me that Ruthenia (or Rusyn)Pysanky are different than the Ukaranian Pysanky in that the Ukaranian's use alot of geometric shapes to decorate their eggs, where the Rusyn eggs use more flowing lines, like a comma shape. He also said each village had their own patterns and colors (sounds a bit like quilt blocks and patterns back in the pioneer days.) ANYHOW, he was describing how he makes these ...... takes the patience of a SAINT !!! After meticulously selecting each and every egg at a chicken farm (he looks for shape and size), he washes them, then pokes a hole in the ends to blow out the innards. THEN he transfers his design onto the egg with a disappearing pen (.... THAT sounds like a quilting thing too!). (then he kind of lost me .....) something about bees wax and a needle , then dipping it in dye .... then lots of varnish .....and the results are STUNNING !!!

Now, to go from the beautiful to the YUMMY !!! PIEROGIES !!! 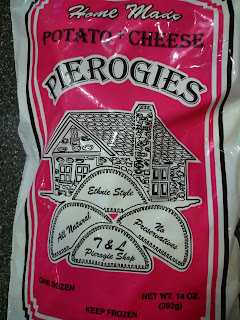 Usually I buy the frozen Mrs.T's pierogies, BUT around these parts, around Easter, the locally HOMEMADE ones show up in the grocery stores, and at different churches ...... and OH BABY ! are they GOOD !!! I can remember watching my grandmother make these from scratch when I was pretty young ..... and even at that young age I can recall thinking "Jeeze Grandma, that looks like a heck of alot of work....." So apparently I wasn't destined to carry on the traditions of the "Old Country" .... too lazy! Oh, and I also remember Grandma making not just the potato /cheese stuffed pierogies, but also .....PRUNE stuffed pierogies .....I know I was just a kid when I was watching her make this stuff and most things look pretty disgusting to kids in the food dept, but, gotta say, sorry Grandma but that stuff looks GROSS!! STILL NOT going to try them!!! But, anyhow, look at these yummy traditional potato and cheese pierogies, tossed with butter (well, to keep it heart smart, Smart Balance) and onions ....... 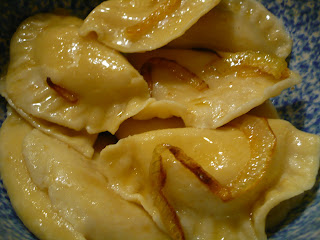 ......OK, continuing on our little Eastern European heritage tour we went from the beautiful, to the yummy, and now to the versatile ...... that being the BABUSHKA !! 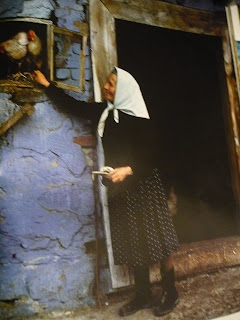 Now the way I see it, the babushka has to be one of the greatest inventions ever (kind of right up there with aprons ). First of all, this Ba Ba is wearing her babushka either because she just got back from the hairdresser and wants to protect her perm, OR because she hasn't had time to get to the hairdresser yet and she's hiding her bad hair day.....AND she could use her babushka to collect those eggs, wrap her bleeding fingers after the chickens peck at them, AND blow her nose in that babushka! ....see, what'd I tell ya .... VERSATILE !

.....Now, not only is the babushka versatile, it's INTERNATIONAL!!! My other grandmother, who was right off the boat from Italy, always wore one.... and now my Italian/American mother continues the tradition. (in fact, she stopped by my house a couple of days ago wearing one. I tried to take her picture wearing it, but she took it off and swatted at me with it .... see yet another use for a babushka!) Well, since my mother wouldn't let me take her picture, Evan and Matthew "volunteered" to be my models ..... 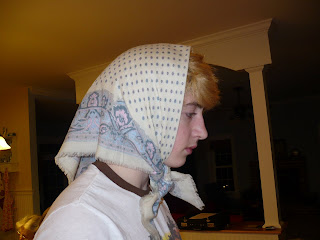 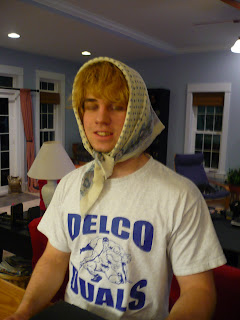 .....here we have Evan and Matt wearing the babushka in the traditional, yet chic style (as seen on celebrities such as Grace Kelly). See.... not only practical, but fashionable!!! 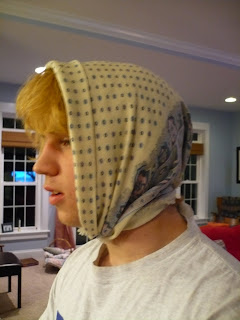 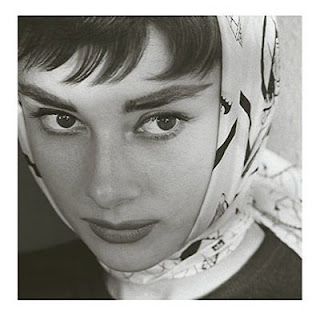 ....and next we have "the Grape Stomper" 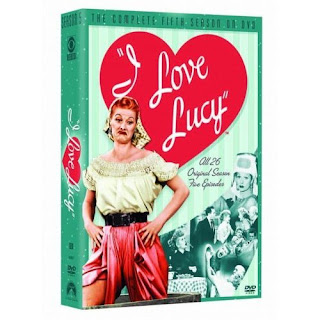 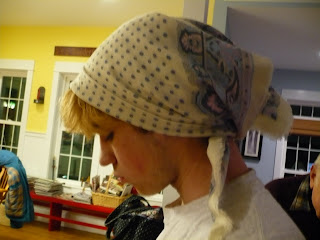 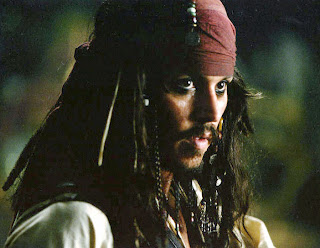 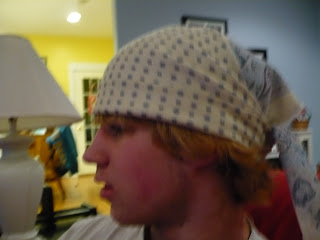 .....and last but not least is the more decorative babushka used for formal occasions like these girls ..... sporting their Easter bonnets .... I mean Easter babushkas in the Easter parade !! 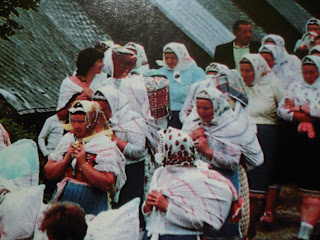 Well .... wasn't that one big long honkin' post !!! I guess I'd better get off this computer and go look for a suitable babushka to wear as my Easter Babushka since I'm just planning ahead for another bad hair day! (and I'm hoping to be one of the glamorous babushka wearers like Grace or Audrey and NOT one of the frumpy babushka wearers like ..... well like the hearty peasant stock that I come from.....)

Toodles,
Mary Anne (aka Mare)
Posted by Mary Anne at 7:11 AM

MMmmm Pierogies! Now that brings a memory or two. I spent 3 years in Thunder Bay Canada where they have a huge Finnish community and that's where I learnt about pierogies, how to make them and how to love them. I suppose to have them over here in GB I'm going to either have to find a specialist restaurant or make them myself...ooh I could do that!

Ok, I must know!! Do you bribe your boys? or do you lurk and "hold" things over their head? My 15 year old wouldn't be caught dead in his sleep with a scarf on.

A fun and educational post! I am just in love with your son (in a motherly way, of course). How great is he to model for you?? Obviously, he's secure, self-confident, fun loving, patient, and encouraging to him mom--what a great guy.

The trip to another country was a blast. I think those babushkas are a great idea--saves tons of time on hair. I love the clothes, too...practical and comfortable. Sigh...a simpler life...we could all use that...

Lisa's right, what a great vacation that was. Especially since I come from Western European stock. I had my first pierogies at a county fair in CT last year. They put sour cream on them too. Delicious.
When I cooked in kitches, I liked to sport the "American Hippie" babushka. Especially when it was really hot. I would soak it in water then put it on. Cools you right off. It is also a better choice than shaving your head on a bad hair day...which I sometimes feel like doing, lol. Thanks for the blog trip. Love Stacy

I don't know how you do it! I started reading this post, all agog, enjoying the gorgeous eggs, and then the pierogies, boy do I love them, and of course you have me rolling on the floor with your babushka's. Your son deserves a standing ovation. He is the best! Susan

Okay, I'm completely hooked on reading your blog! I came in tonight from the dance program at school, and went straight to it! I love just letting your music play...those are all my favorite songs! Thanks for entertaining and educating all of us!

I truly enjoy your blog!! A history lesson, some ymmers to drool over, your boys ....too funny, and Jack Sparrow. Great post :-)! Thanks!!

UGH!!! What happened? I have only been clicking on your blog everyday and it kept coming up with a post of yours from ages ago.....Didn't know you had a give-away (wahhhhh!) and missed your gorgeous pics of you in the mirror etc...and just thought you were super busy with your handsome sons or something..... Phewwww. Glad to see I can FINALLY jump start my day with your refreshing-better-than-caffeine posts!

Hello. This post is likeable, and your blog is very interesting, congratulations :-). I will add in my blogroll =). If possible gives a last there on my blog, it is about the Celular, I hope you enjoy. The address is http://telefone-celular-brasil.blogspot.com. A hug.

Babushka!!! I congratulate you on a fine post! It had everything- Johnny Depp and Audrey Hepburn- teenage boys being funny! How much did you have to pay them for those hilarious pictures?? Very Funny! I came by because Two Cold Feet said you would be so proud- come see my chicken posse with one wearing a babushka! I love it! Rock on sister! (the hello kitty was very cute also! You have a special gift for making people wear head gear, don't ya??!! :) your Dad is such a sport!) xxxooo calamity kim